And I Darken (Hardcover) 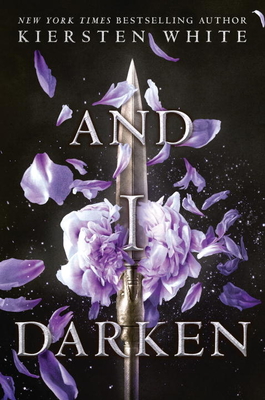 And I Darken (Hardcover)

This is book number 1 in the And I Darken series.

This vividly rendered novel reads like HBO’s Game of Thrones . . . if it were set in the Ottoman Empire. Ambitious in scope and intimate in execution, the story’s atmospheric setting is rife with political intrigue, with a deftly plotted narrative driven by fiercely passionate characters and a fearsome heroine. Fans of Victoria Aveyard’s THE RED QUEEN and Sabaa Tahir’s AN EMBER IN THE ASHES won’t want to miss this visceral, immersive, and mesmerizing novel, the first in the And I Darken series.

NO ONE EXPECTS A PRINCESS TO BE BRUTAL. And Lada Dragwlya likes it that way. Ever since she and her gentle younger brother, Radu, were wrenched from their homeland of Wallachia and abandoned by their father to be raised in the Ottoman courts, Lada has known that being ruthless is the key to survival. She and Radu are doomed to act as pawns in a vicious game, an unseen sword hovering over their every move. For the lineage that makes them special also makes them targets.

Lada despises the Ottomans and bides her time, planning her vengeance for the day when she can return to Wallachia and claim her birthright. Radu longs only for a place where he feels safe. And when they meet Mehmed, the defiant and lonely son of the sultan, who’s expected to rule a nation, Radu feels that he’s made a true friend—and Lada wonders if she’s finally found someone worthy of her passion.

But Mehmed is heir to the very empire that Lada has sworn to fight against—and that Radu now considers home. Together, Lada, Radu, and Mehmed form a toxic triangle that strains the bonds of love and loyalty to the breaking point.

From #1 New York Times bestselling author Kiersten White comes the first book in a dark, sweeping new series in which heads will roll, bodies will be impaled . . . and hearts will be broken.

“A dark and twisty fantasy . . . think Game of Thrones, but with teens.”—Seventeen

“Will completely spin you into another time and place.”—Bustle

An ALA Rainbow List Top Ten Selection
Kiersten White is the #1 New York Times bestselling author of the Camelot Rising, And I Darken, and Paranormalcy series and many more novels. She is also the author of the Sinister Summer series for middle grade readers. She lives with her family near the ocean in San Diego, which, in spite of its perfection, spurs her to dream of faraway places and even further-away times.

“A dark jewel of a story, one that gleams with fierce, cunning characters—absolutely riveting.” —Alexandra Bracken, #1 New York Times bestselling author of Passenger

“Kiersten White at her absolute best. The epic story will thrill you, the Transylvanian setting will transport you, and the characters (especially the fierce, take-no-prisoners Lada) will capture your heart. Don’t miss it.” —Cynthia Hand, New York Times bestselling author of the Unearthly series

“Sweeping and epic, AND I DARKEN is a gender-bent take on history that gives us a fierce and brutal heroine, a fascinating time period, and a beautifully intelligent look at love, family, and power. I loved every twisty, bloody moment of it!” —Rachel Hawkins, New York Times and USA Today bestselling author

“As richly complex and glittering as the Ottoman Empire itself, AND I DARKEN is daring in its scope and brilliantly executed. The fiercely dark Lada is a razor-edged sword tempered in the blood of family betrayals and the fire of her own passions. I was instantly and utterly smitten. She haunted me long after I turned the final page and left me craving more.” —Robin LaFevers, New York Times bestselling author of the His Fair Assassin series

“A jewel of a book—a jewel embedded in the hilt of a blood-soaked sword. A brilliantly envisioned alternate history that is meticulously detailed but compulsively readable, this is a story I could not put down. I demand the sequel like Lada demands Wallachia!” —Beth Revis, New York Times bestselling author of the Across the Universe series

"An intense, risky, passionate novel that dragged me through love and danger with the force of its heroine’s heart and the power of its hero’s faith.” —Tessa Gratton, author of the Gods of New Asgard series

“Girls with teeth and priorities. I want to read this book forever.” —E. K. Johnston, author of A Thousand Nights


"White excels at presenting an anti-hero who contrasts conventional female heroines. Readers expecting a typical love triangle tale will be surprised, for Lada’s characterization is executed in a far-from-stereotypical manner as White challenges femininity and explores the types of power women can wield. White also succeeds in crafting an accessible setting that brings complex historical figures to life."--VOYA

The Chaos of Stars:
“Eloquent in its mixing of Egyptology with the experience of being a teenager . . . the character development, action-packed climax, intriguing family dynamics, and heartfelt romance will draw in fans.” —VOYA

Illusions of Fate:
“An absolute delight—a magical, sparkling, dangerous world with witty repartee and a romance that will light your heart on fire. Kiersten White’s best yet.” —Stephanie Perkins, internationally bestselling author of Anna and the French Kiss

“This well-written historical fantasy has romance, suspense, a fairy-tale feel, and a great ending that will leave readers cheering.” —SLJ

“Deliciously original in its intriguing plot and irresistible characters. ILLUSIONS OF FATE may be filled with spells, but it’s Kiersten White who is truly magic.” —Andrea Cremer, New York Times bestselling author of the Nightshade series


In the Shadows:
★ “An enthralling, page-turning gothic mystery infused with hair-raising horror.”—Booklist, Starred