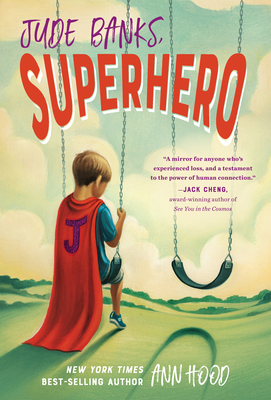 New York Times best-selling author Ann Hood pens a poignant story of grief and resilience, perfect for readers of The Thing About Jellyfish.

"A testament to the power of human connection.” —Jack Cheng, award-winning author of See You in the Cosmos


Katie was Jude's favorite person in the world. And not many brothers say that about their sister and mean it. But to Jude, Katie was everything--the person who made him learn how to say "I love you" in every language, who performed dramatic readings of Romeo and Juliet, who obsessed over every item on the diner menu looking for the most authentic diner meal. The one who called him "Jude Banks, Superhero," because to her, Jude was the best.

She was also the person who died. Out of nowhere, and without a goodbye. And Jude believes he was the one who killed her.

Now, twelve-year-old Jude must figure out what life looks like without his favorite person. With Mom checked out, and Dad just trying to do his best, Jude enters a world of grief youth groups and dropped-off lasagnas. It's only when he meets a girl named Clementine, who also lost a sibling, that he begins to imagine a world where maybe things might be okay. But Clementine is also feeling a terrible guilt, and even though Katie called Jude a "superhero," he isn't sure he can save her.

In her signature prose, Hood crafts an extraordinary story of grief and resilience, asking the important question: How does a family begin to heal?

Praise for Jude Banks, Superhero:
"Hood is brilliant at showing the ordinary moments of a family’s heartbreak… There are many readers who are navigating guilt and sorrow right now — for them, this book is a must. And for those lucky enough to take the journey only in their imaginations, this is a story of resilience in the face of devastating pain.”—New York Times Book Review

"Hood’s careful gardening of emotions makes this a striking read... Fans of Ali Benjamin's The Thing about Jellyfish will appreciate Jude’s search for meaning and reason as he learns to live around the hole his sister has left."—Booklist (Starred Review)

“Ann Hood tells Jude’s story of grief without coating it in too much sugar; it’s real, and therein lies its power. Jude Banks is a mirror for anyone who’s experienced loss, and a testament to the power of human connection.”—Jack Cheng, award-winning author of See You in the Cosmos

"Jude Banks is warm and inviting, even as it balances the difficult topics of loss and healing—a powerful and compelling story for anyone who has known loss."—Rex Ogle, award winning author of Free Lunch

Ann Hood is the author of the best-selling novels The Book That Matters Most, The Obituary Writer, Somewhere Off the Coast of Maine, The Red Thread, and The Knitting Circle, as well as the memoir Comfort: A Journey Through Grief, which was a New York Times Editor's Choice and chosen as one of the top ten nonfiction books of 2008 by Entertainment Weekly. She has won two Pushcart Prizes as well as a Best American Spiritual Writing Award, two Best American Food Writing Award, and a Best American Travel Writing award. A regular contributor to the New York Times, Hood's short stories and essays have appeared in many publications, including Ploughshares, Tin House, Traveler, Bon Appetit, O, More, The Wall Street Journal, The Washington Post, The Paris Review, and others. She is the editor of the anthologies Knitting Yarns: Writers Writing About Knitting, Knitting Pearls: More Writers Writing About Knitting, and Providence Noir. Hood is also the author of books for children, including the middle-grade novels She Loves You (Yeah, Yeah, Yeah) and How I Saved My Father (And Ruined Everything Else), and the ten-book Treasure Chest series. She lives in Providence, Rhode Island, and New York City, and is married to the writer Michael Ruhlman.