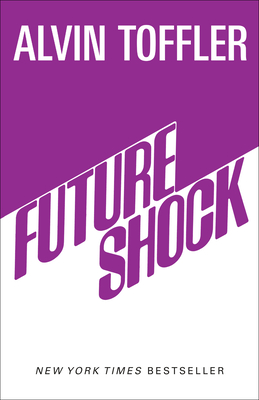 
Available at One of Our Locations
NEW YORK TIMES BESTSELLER • The classic work that predicted the anxieties of a world upended by rapidly emerging technologies—and now provides a road map to solving many of our most pressing crises.

Future Shock is the classic that changed our view of tomorrow. Its startling insights into accelerating change led a president to ask his advisers for a special report, inspired composers to write symphonies and rock music, gave a powerful new concept to social science, and added a phrase to our language. Published in over fifty countries, Future Shock is the most important study of change and adaptation in our time.

In many ways, Future Shock is about the present. It is about what is happening today to people and groups who are overwhelmed by change. Change affects our products, communities, organizations—even our patterns of friendship and love.

But Future Shock also illuminates the world of tomorrow by exploding countless clichés about today. It vividly describes the emerging global civilization: the rise of new businesses, subcultures, lifestyles, and human relationships—all of them temporary.

Future Shock will intrigue, provoke, frighten, encourage, and, above all, change everyone who reads it.
Alvin Toffler (1928–2016) was an American writer and futurist whose list of bestselling books includes Future Shock, The Third Wave, and Powershift. He was a cofounder of Toffler Associates, a consulting firm for companies and governments worldwide on advances in economics, technology, and social change. In France, where his work won the prestigious Prix du Meilleur Livre Étranger (Best Foreign Book Prize), Alvin was named an Officier de l’Ordre des Arts et des Lettres.
“Revealing, exciting, encouraging, brilliant.”—The Christian Science Monitor

“In the risky business of social and cultural criticism, there appears an occasional book that manages . . . to shape our perceptions of its times. Alvin Toffler’s immensely readable yet disquieting study may service the same purpose for our own increasingly volatile world.”—Newsweek

“Alvin Toffler has sent something of a shock-wave through Western society.”—Daily Express (London)

“To the elite . . . who often get committed to age-old institutions or material goals alone, let Toffler’s Future Shock be a lesson and a warning.”—The Time of India