The Crime That Binds (A Bookmobile Cat Mystery #10) (Mass Market) 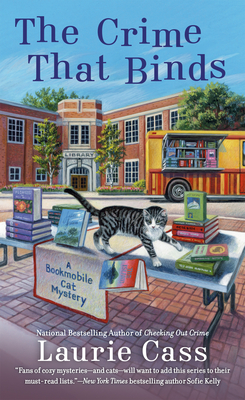 The Crime That Binds (A Bookmobile Cat Mystery #10) (Mass Market)

This is book number 10 in the A Bookmobile Cat Mystery series.

Librarian Minnie Hamilton and her rescue cat, Eddie, are ready to pin down a bank robber in the newest installment of the delightful Bookmobile Cat mystery series.

Late March is prime reading weather in the small northern Michigan town of Chilson. Though snowfall and cloudy skies deter outdoor activities, life inside the bookmobile is warm and cheerful. But as Minnie and Eddie are making the rounds to deliver comforting reads, they see something strange: loyal bookmobile patron Ryan Anderson making a sudden u-turn and speeding away. When Minnie discovers the police want to question Ryan about a bank robbery and the death of a security guard, she realizes she’s one of the only people who thinks Ryan isn’t morally bankrupt.

When an additional murder victim is discovered, the police immediately suspect her patron, but Minnie isn’t convinced. And when she encounters Ryan hiding from the police, she decides to help him by investigating the crimes. Minnie and Eddie will have to fight tooth and claw to prove his innocence.
Laurie Cass is the national bestselling author of the Bookmobile Cat Mystery series.
Praise for Laurie Cass