The Impeachment Report: The House Intelligence Committee's Report on Its Investigation into Donald Trump and Ukraine (Paperback) 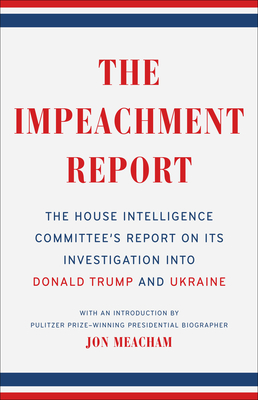 By The House Intelligence Committee, Jon Meacham (Introduction by)
$12.99

For only the fourth time in American history, the House of Representatives has conducted an impeachment inquiry into a sitting United States president. This landmark document details the findings of the House Intelligence Committee’s historic investigation of whether President Donald J. Trump committed impeachable offenses when he sought to have Ukraine announce investigations of former vice president Joe Biden and his son Hunter.

Penetrating a dense web of connected activity by the president, his ambassador Gordon Sondland, his personal attorney Rudolph Giuliani, and many others, these pages offer a damning, blow-by-blow account of the president’s attempts to “use the powers of his office to solicit foreign interference on his behalf in the 2020 election” and his subsequent attempts to obstruct the House investigation into his actions. Published here with an introduction offering critical context from bestselling presidential historian Jon Meacham, The Impeachment Report is necessary reading for every American concerned about the fate of our democracy.

Jon Meacham is a Pulitzer Prize-winning biographer. He is the author of the New York Times bestsellers Thomas Jefferson: The Art of Power; American Lion: Andrew Jackson in the White House; Franklin and Winston: An Intimate Portrait of an Epic Friendship; Destiny and Power: The American Odyssey of George Herbert Walker Bush; Songs of America; and The Soul of America: The Battle for Our Better Angels. He is a distinguished visiting professor at Vanderbilt University, a contributing writer for The New York Times Book Review, and a fellow of the Society of American Historians.