Red Line: The Unraveling of Syria and America's Race to Destroy the Most Dangerous Arsenal in the World (Large Print / Paperback) 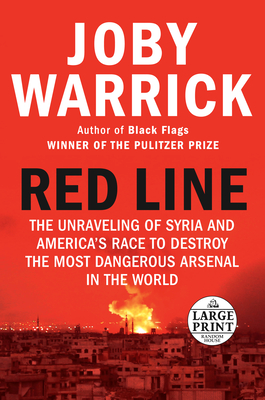 From the Pulitzer Prize–winning author of Black Flags, the thrilling unknown story of America’s mission in Syria: to find and destroy Syria’s chemical weapons and keep them out of the hands of the Islamic State

In August 2012, Syrian president Bashar al-Assad was clinging to power in a vicious civil war. When secret intelligence revealed that the dictator might resort to using chemical weapons, President Obama warned that doing so would cross “a red line.” Assad did it anyway, bombing the Damascus suburb of Ghouta with sarin gas, killing hundreds of civilians and forcing Obama to decide if he would mire America in another unpopular Middle Eastern war. When Russia offered to broker the removal of Syria’s chemical weapons, Obama leapt at the out.

So begins an electrifying race to find, remove, and destroy 1,300 tons of chemical weapons in the midst of a raging civil war. The extraordinary little-known effort is a triumph for the Americans, but soon Russia’s long game becomes clear: it will do anything to preserve Assad’s rule. As America’s ability to control events in Syria shrinks, the White House learns that ISIS, building its caliphate in Syria’s war-tossed territory, is seeking chemical weapons for itself, with an eye to attacking the West.

Red Line is a classic Joby Warrick true-life thriller: a character-driven narrative with a cast of heroes and villains, including weapons hunters, politicians, doctors, diplomats, and spies. Drawing on astonishing original reporting, Warrick reveals how the United States embarked on a bold adventure to prevent one catastrophe but could not avoid a tragic chain of events that empowered America’s enemies.

JOBY WARRICK has been a reporter for The Washington Post since 1996. He has twice won the Pulitzer Prize, for journalism and for his book Black Flags: The Rise of ISIS. He is also the author of The Triple Agent.

"Joby Warrick tells the story of President Bashar al-Assad’s chemical weapons program, from the dormant period when it was holstered in vats in facilities scattered around the country, to its use against civilians, to its supposed dismantling. . . Warrick presents it sharply and compellingly."
--The Washington Post

"Much has been written about the use of chemical weapons during the war in Syria, but the accounts are partial. The virtue of Warrick’s book is that it provides a panoramic reconstruction of the chemical attack and its aftermath. We see it from the eyes of survivors, doctors, activists, disarmament experts, diplomats, and policymakers. The book cuts from scenes on the ground in Eastern Ghouta, to the U.N. inspectors in Damascus, to National Security Council meetings in the White House, telling the story with urgency and clarity."
--Newsline

"Joby Warrick . . . has produced another highly readable and well-sourced work, a bleak but real-life thriller. Its characters include ordinary Syrians, spies, diplomats, UN experts and Americans who worked hard to destroy Assad’s chemical weapons arsenal, only to discover that they had not completed their task."
--The Guardian

"Necessary . . . Joby Warrick’s Red Line can grip as tightly as any thriller, but the reader has to take mental notes if not actual ones."
--Hugh Hewlitt, The Washington Post

"This riveting narrative . . . reads like a thriller . . . Warrick’s vivid portraits of so many of the diverse inviduals involved, from victims to American engineers and U.N. investigators, provide a devastating perspective on the civil war in Syria."
--The National Book Review

"A pleasure to read, Red Line also comprises a valuable addition to the growing literature on the war in Syria. . . the book includes equally compelling accounts with characters ranging from UN weapons inspectors and Syrian doctors to Islamic State operatives planning their own chemical attacks. In Warrick’s hands, their experiences come alive."
--The National Interest

“Red Line is a forensic examination of the moral culpability of the Assad government and its Russian backers . . . Warrick combines novelist’s gift for storytelling with the journalist’s gift for hard research.”
--The Tablet

"Lively and easily accessible . . . This book will benefit both Syria observers and those interested in disarmament issues. Above all, it contains powerful material that should serve as a warning to us all – in terms of chemical weapons in Syria, if anything we were fortunate."
--The New Arab

"An unsettling look at the extraordinarily brutal civil war that has engulfed Syria since 2011. . . Warrick delivers a vivid account."
--Kirkus