Crying in the Bathroom: A Memoir (Hardcover) 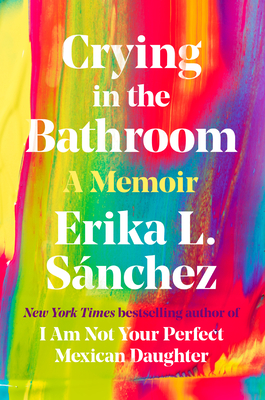 Crying in the Bathroom: A Memoir (Hardcover)


Available at One of Our Locations
“Equal parts pee-your-pants hilarity and break your heart poignancy- like the perfect brunch date you never want to end!"--America Ferrera, Emmy award-winning actress in Ugly Betty

From the New York Times bestselling author of I Am Not Your Perfect Mexican Daughter, an utterly original memoir-in-essays that is as deeply moving as it is disarmingly funny

Growing up as the daughter of Mexican immigrants in Chicago in the ‘90s, Erika L. Sánchez was a self-described pariah, misfit, and disappointment—a foul-mouthed, melancholic rabble-rouser who painted her nails black but also loved comedy and dreamed of an unlikely life as a poet. Twenty-five years later, she’s now an award-winning novelist, poet, and essayist, but she’s still got an irrepressible laugh, an acerbic wit, and singular powers of perception about the world around her.

In these essays about everything from sex to white feminism to debilitating depression to the redemptive pursuits of spirituality, art, and travel, Sánchez reveals an interior life that is rich with ideas, self-awareness, and perception—that of a woman who charted a path entirely of her own making. Raunchy, insightful, unapologetic, and brutally honest, Crying in the Bathroom is Sánchez at her best: a book that will make you feel that post-confessional high that comes from talking for hours with your best friend.
Erika L. Sánchez is a Mexican-American poet, novelist, and essayist. Her debut poetry collection, Lessons on Expulsion, was published by Graywolf in July 2017, and was a finalist for the PEN America Open Book Award. Her debut young adult novel, I Am Not Your Perfect Mexican Daughter, published in October 2017 by Knopf Books for Young Readers, was a New York Times bestseller and a National Book Awards finalist. It is now is being made into a film directed by America Ferrera. Sanchez was a 2017-2019 Princeton Arts Fellow, a 2018 recipient of the 21st Century Award from the Chicago Public Library Foundation, and a 2019 recipient of the National Endowment for the Arts Fellowship.
Best of BookRiot • Best of San Francisco Chronicle • Best of WGN • Best of NBC News • Best of HipLatina

"Each essay feels like a conversation with a good friend, thanks to Sánchez’s warm and vulnerable writing." --TIME's Roundup of "27 Books You Need to Read this Summer"

"A deeply personal, compassionate, and moving glimpse into her life that left me in tears at the end." --Buzzfeed's "Best Books Releasing in July"

“Sánchez writes hilariously and movingly about dating, depression, and defying expectations…We’d cry with Erika Sánchez in the bathroom any day.”--Glamour

"Her smart and spiky voice enlivening connected essays on growing up brown and depressed — but also obsessed with comedy. You’ll yearn for a sequel before you’ve even turned the last page." --LA Times

“The memoir that doesn’t wind its way toward a harsh revelation or the summiting of a mountain, the memoir that merely considers a life, is rare…Crying in the Bathroom…[is] an account of childhood depression, and falling in love with comedy, a 'fraught' relationship with her grandmother, suffering through a bad marketing job in the Sears Tower, risking the uneasy life of a writer. It’s also a lesson in nurturing a clear voice.”--Chicago Tribune

"Sánchez is an honest, vulnerable writer who doesn’t hold any of her truths back—from LGBT rights to women’s issues, from sex to love."--HipLatina

"Bestselling author Erika L. Sánchez has written this unique yet relatable memoir in essays that will have you crying from laughter and heartbreak. Keep the tissues nearby!" --Ms. Magazine's "July 2022 Reads for the Rest of Us"

"With animated, often hilarious, vignettes from a multicultural youth spent yearning for the solitude necessary for writing, Crying in the Bathroom finds the author immensely grateful for…a splendid study of her own and the sacrifices her hardworking parents made so their daughter could pursue her literary dreams and lead a life of the mind."--Shelf Awarness

“To make your readers crack up while also discussing weighty topics like sexism, racism, and depression is no easy task, but it’s one Erika L. Sánchez is well equipped for…she has written a memoir/essay collection that [is] poignant and bold.” --LitHub

“Her ability to relate to readers on a personal, intellectual, and cultural levels is one of the book’s greatest achievements…An engrossing, accessible, heart-opening recollection of a fascinating life.” --Booklist

"Her writing shines with a deep humility wrought from the hard-won nature of her personal peace. The result is another satisfying addition to Sánchez's deeply moving body of works."--Publishers Weekly

“A famous Latino comic told me—quoting either Chaplin or Cantinflas or both—that if you tell a story that makes people laugh, that’s great, but if you make them laugh and cry, that’s genius.  Erika Sánchez tells her tale with a ‘deluge of unidentifiable feelings that came out through my eyes.’  It’s only after you’ve laughed that you understand the heartbreak beneath the laughter.  I relished especially the stories she shares about being a wanderer savoring her solitude, a rare gift for a woman, but absolutely essential for any writer.” --Sandra Cisneros, New York Times bestselling author of The House on Mango Street

"CRYING IN THE BATHROOM is deeply personal, in the best sense -- honest, cutting, hilarious, revelatory. These essays strike deep chords for any of us who came of age in the nineties, or really for anyone who came of age at all." --Rebecca Makkai, Pulitzer finalist for The Great Believers

“After reading, Crying in the Bathroom, Erika L. Sánchez has undoubtedly cemented herself as not just one of my favorite writers, but also as my best friend... in my mind. Because why wouldn’t I want to be close to someone so intentional, so funny, so proven, and most importantly, so self-aware they could tell a story about their life in a way that makes me take inventory of my own? To put it simply, which I'm not sure is actually possible, this is a whoopie cushion, a gut punch, and an alarm clock of a book.” --Jason Reynolds, New York Times bestselling author of Look Both Ways: A Tale Told in Ten Blocks