Jennifer Chan Is Not Alone (Hardcover) 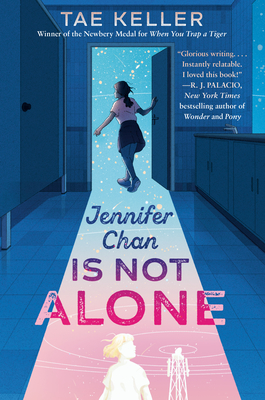 Jennifer Chan Is Not Alone (Hardcover)


Available at One of Our Locations
In her first novel since winning the Newbery Medal for When You Trap a Tiger, Tae Keller offers a gripping and emotional story about friendship, bullying, and the possiblity that there's more in the universe than just us.

Sometimes middle school can make you feel like you're totally alone in the universe...but what if we aren't alone at all?

Thanks to her best friend, Reagan, Mallory Moss knows the rules of middle school. The most important one? You have to fit in to survive. But then Jennifer Chan moves in across the street, and that rule doesn’t seem to apply. Jennifer doesn’t care about the laws of middle school, or the laws of the universe. She believes in aliens—and she thinks she can find them.

Then Jennifer goes missing. Using clues from Jennifer’s journals, Mallory goes searching. But the closer she gets, the more Mallory has to confront why Jennifer might have run . . . and face the truth within herself.

Tae Keller lights up the sky with this insightful story about shifting friendships, right and wrong, and the power we all hold to influence and change one another. No one is ever truly alone.
TAE KELLER is the Newbery Award-winning and New York Times bestselling author of When You Trap A Tiger and The Science of Breakable Things. She was born and raised in Honolulu, where she grew up on purple rice, Spam musubi, and her halmoni's stories. After high school, she moved in search of snow, and now lives in Seattle. Visit her at TaeKeller.com, follow her monthly love letters at bit.ly/lovetae, and find her on Twitter and Instagram.
“I absolutely loved this book! Tae’s glorious writing had me hooked and her characters, so wonderfully imperfect and nuanced, felt instantly relatable. She had me wondering which is more mysterious: extraterrestrials, or the beautiful, occasionally-heartbreaking intricacies of friendship.” –R. J. Palacio, New York Times bestselling author of Wonder and Pony

"Keller’s skillful interior narration puts us inside Mallory’s skin, even when it makes us uncomfortable." —The New York Times

★ “A mesmerizing look at bullying and its aftereffects.” —Kirkus, starred review

★ “By setting the victim, the missing Jennifer, into the narrative background, Keller directs the flood light onto Mallory and company and aims responsibility (and possible redemption) right where it belongs.” —The Bulletin, starred review

★ “With an appeal to a wide variety of readers, this genre fusion is highly recommended for all library shelves.” —School Library Journal, starred review

★ “The emotionally absorbing story is full of thought-provoking explorations on self-confidence, forgiveness, and friendship while illuminating parallels between alien and human struggles.” —Booklist, starred review

★ “Keller uses a vulnerable first-person narrative that alternates between past and present to sensitively detail the emotional roller coaster of navigating changing social rules, the anxieties of being oneself, and the process of coming to terms with one’s flaws.” —Publishers Weekly, starred review