The Sassoons: The Great Global Merchants and the Making of an Empire (Hardcover) 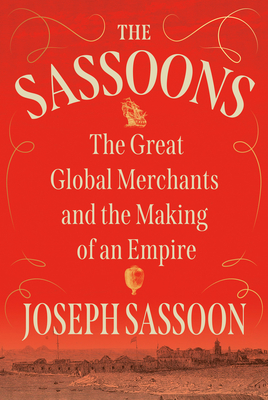 The Sassoons: The Great Global Merchants and the Making of an Empire (Hardcover)


Available at One of Our Locations
A spectacular generational saga of the making (and undoing) of a family dynasty: the riveting untold story of the gilded Jewish Bagdadi Sassoons, who built a vast empire through global finance and trade—cotton, opium, shipping, banking—that reached across three continents and ultimately changed the destinies of nations. With full access to rare family photographs and archives.

They were one of the richest families in the world for two hundred years, from the 19th century to the 20th, and were known as ‘the Rothschilds of the East.’

Mesopotamian in origin, and for more than forty years the chief treasurers to the pashas of Baghdad and Basra, they were forced to flee to Bushir on the Persian Gulf; David Sassoon and sons starting over with nothing, and beginning to trade in India in cotton and opium.

The Sassoons soon were building textile mills and factories, and setting up branches in shipping in China, and expanding beyond, to Japan, and further west, to Paris and London. They became members of British parliament; were knighted; and owned and edited Britain’s leading newspapers, including The Sunday Times and The Observer.

And in 1887, the exalted dynasty of Sassoon joined forces with the banking empire of Rothschild and were soon joined by marriage, fusing together two of the biggest Jewish commerce and banking families in the world.

Against the monumental canvas of two centuries of the Ottoman Empire and the changing face of  the Far East, across Europe and Great Britain during the time of its farthest reach, Joseph Sassoon gives us a riveting generational saga of the making of this magnificent family dynasty.
JOSEPH SASSOON is Professor of History and Politics at Georgetown University. He is also a Senior Associate Member at St. Antony’s College, Oxford and a Trustee of the Bodleian Library. His previous books include the prize-winning Saddam Hussein's Ba'th Party, The Iraqi Refugees and The Anatomy of Authoritarianism in the Arab Republics.
“Engaging . . . Compelling . . . Sassoon’s detailed account of the decentralization of family power and the proliferation of descendants interested in spending but not making money is well paced and supremely satisfying . . . It’s more than just schadenfreude that makes the Sassoon story fascinating. Their improbable rise to great heights and the ways in which they changed the world can be thrilling to behold, and in an era whose main characters include ubiquitous space-racing billionaires, being reminded that even the most powerful among us can be easily forgotten is important. Joseph Sassoon’s book isn’t just a marvelous yarn, it’s an Ottoman ‘Our Crowd’ that gives his family its due.”
—Adam Rathe, The New York Times

“A revelatory rise-and-fall narrative of a secretive clan who pursued wealth but mostly shunned fame and power . . . A marvelous epitaph to a monumental family, makers of several worlds and keepers of none. Their ancestral relics continue to light up auction houses, and their ethos flickers at the fringe of globalized finance, a warning from history that character, not calculation, is what makes and breaks the greatest fortunes.”
—Norman Lebrecht, The Wall St Journal

“Riveting . . . Readers will take away a great deal of British and Asian modern history from Sassoon’s globetrotting account.”
—Los Angeles Review of Books

“The extraordinary, compelling story of the rise and fall of the Sassoon family. It begins like a detective novel, and moves from the Ottoman Archives in Istanbul to private, official and business archives in Delhi, Hong Kong and Jerusalem. [The Sassoons] recounts the history of nineteenth- and twentieth-century commerce, in opium, pearls and cotton mills, from Baghdad and Bombay to London and Shanghai. The Sassoons made their fortunes in the British Empire, and their destiny is also a story of having become too English, amidst the end of empire.”
—Emma Rothschild, author of An Infinite History: The Story of a Family in France Over Three Centuries

“The Sassoons were the ultimate imperial dynasty, Mesopotamian Jews who made their money trading opium between British India and Qing China. Like Amschel Rothschild, David Sassoon deployed his sons to create a multinational family firm. Like the Romans, the Sassoons split their empire into Western and Eastern halves. And like Thomas Mann’s Buddenbrooks, the Sassoon family depleted their entrepreneurial spirit in pursuit of social acceptance, some part of which was always withheld. This is a deeply researched, wonderfully rich account of a family that, perhaps more than any other, personified British imperialism in all its ambivalence.”
—Niall Ferguson, author of The Ascent of Money: A Financial History of the World

“The engrossing story of the meteoric rise and calamitous fall of the Sassoons, and is set against a backdrop of peak British imperialism . . . the reader is well-rewarded with some pitch-perfect cameos. Take Rachel Sassoon, who became the first woman to edit a national newspaper in Britain (The Observer), before going one better and buying and editing The Sunday Times in 1893. Then there was Sir Philip Sassoon, an MP, minister, socialite and chairman of the National Gallery . . . What a scintillating show it was while it lasted, as this vivid and richly researched book reveals.”
—Justin Marozzi, The Sunday Times

“A tale reminiscent of Thomas Mann’s Buddenbrooks . . . a passion for discovery inspires this well-balanced and fluently written book . . . Not only is this a powerful human story but it also carries contemporary resonance in a time when great fortunes are again being made.”
—Stefan Wagstyl, Financial Times

“The Sassoons’ remarkable contribution to the history of Western globalization, cosmopolitanism, urban development and decorative art has been concealed. Now Joseph Sassoon has resurfaced that legacy with this scholarly and wide-ranging corporate and family history, which deftly charts their exploitation of the British Empire, before the stick embrace of the English aristocracy suffocated their commercial ambition.”
—Tristram Hunt, Times Literary Supplement

“They built, Sassoon suggests, the first truly global business, able to grasp the connection between the silk harvest in France and the price of rice in Shanghai, or the way that sugar in Java could be sold at a profit in India. That they lost this panoptic capacity, settling instead for a cosy and blinkered parochialism, is the great tragedy that underpins this fascinating book.”
—Kathryn Hughes, Guardian

“Our taste for tales of business dynasties is clearly insatiable. Just ask the creators of patriarch-oligarch Logan Roy and his scheming offspring, watched by millions of television viewers. Pondering his chosen pool of successors, Logan might do well to read Joseph Sassoon’s [The Sassoons] for tips . . . [The Sassoons] charts the century-long trajectory of the Sassoon empire—the rise from obscurity to prominence as successful merchants in Baghdad who followed the spread of the British Empire eastward. Sassoon presents a tale of commercial derring-do and a dissection of the paperwork, the exigencies of calm, but rapid, decision-making that could lead to boom or bust.”
—Paul French, South China Morning Post

“Sir Victor kept a diary—in English. His Sassoon ancestors, however, preferred the secrecy of an obscure Judeo-Arabic script, indecipherable to previous historians until it was finally decoded by Professor Joseph Sassoon, descendent of another branch and author of this book. What Sassoon’s assiduous mining of the archives has produced is a family history writ large . . . the story of the Sassoons’ rise from Ottoman Baghdadis to incalculably wealthy figures of the British Establishment is fascinating.”
—Anne de Courcy, Daily Telegraph

“Grand . . . enlivened by portraits of illustrious family members including Farha Sassoon, who successfully ran the Bombay headquarters of the business after her husband’s death in 1894, and WWI poet Siegfried Sassoon . . . an impressive deep dive into a family that bridged East and West as they built—and lost—an empire.”
—Publishers Weekly