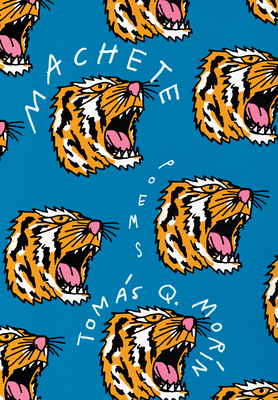 
Available at One of Our Locations
This fresh voice in American poetry wields lyric pleasure and well-honed insight against a cruel century that would kill us with a thousand cuts.

"Morín's writing uses the mundane details of everyday life . . . as a jumping-off point for creating fascinating and philosophical worlds." —LitHub


"Dios aprieta, pero no ahorca" ("God squeezes, but He doesn't strangle")--the epigraph of Machete--sets the stage for a powerful poet who summons a variety of ways to endure life when there's an invisible hand at your throat. Tomás Morín hails from the coastal plains of Texas, and explores a world where identity and place shift like that ever-changing shore.

In these poems, culture crashes like waves and leaves behind Billie Holiday and the CIA, disco balls and Dante, the Bible and Jerry Maguire. They are long, lean, and dazzle in their telling: "Whiteface" is a list of instructions for people stopped by the police; "Duct Tape" lauds our domestic life from the point of view of the tape itself.

One part Groucho Marx, one part Job, Morín considers our obsession with suffering--"the pain in which we trust"--and finds that the best answer to our predicament is sometimes anger, sometimes laughter, but always via the keen line between them that may be the sharpest weapon we have.
TOMÁS Q. MORÍN is the author of the memoir Let Me Count the Ways, forthcoming from University of Nebraska Press, as well as the poetry collections Patient Zero and A Larger Country. He is coeditor, with Mari L'Esperance, of the anthology Coming Close: Forty Essays on Philip Levine and translator of The Heights of Macchu Picchu by Pablo Neruda. He teaches at Rice University and Vermont College of Fine Arts. Morín lives with his family in Texas.
"[Morín’s] writing cuts to the core with electrifying force . . . A promising and powerful new voice in American poetry, the Texas native arrives with a revealing anthology about suffering, self-identity and the trivial occasions that tie one’s existence together . . . If you’re not a big fan of poetry, “Machete” will make you one." —Nicholas Addison Thomas, The Free Lance-Star

“Wonderfully intimate . . . Highlights Morín’s versatility as a poet who fuses both content and form . . . I would rush out to buy a copy of Machete just to have a poem like ‘Two Dolphins’ on hand. Not only was I captivated by the sheer beauty and dexterity of the poem but I was struck by how rare it is to come across poems about fatherhood . . . If Morín wields language like a machete, it’s to slash through ignorance, to clear a path for strollering his children onto a sidewalk, safe from traffic.” —Julie Poole, Texas Observer