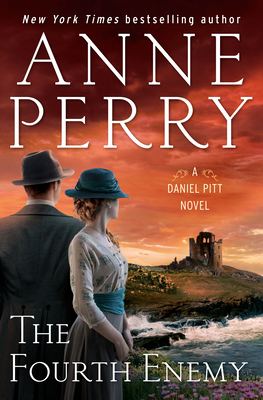 This is book number 6 in the Daniel Pitt series.

Working his way up at London law firm fford Croft and Gibson, Daniel Pitt is named second prosecutor on a fraud case with the potential to make or break his—and the firm's—reputation. The trouble is, Malcolm Vayne, the man on trial, has deep pockets, and even deeper connections. Vayne’s philanthropic efforts paint him a hero in the eyes of the public, but Daniel’s friend Ian, a police officer, has evidence to suggest otherwise. Nervously working alongside the new head of his firm, Daniel is under pressure to prove that Vayne is guilty.

Meanwhile, Daniel’s new bride, forensic scientist Miriam fford Croft, befriends Rose, the wife of Daniel’s colleague Gideon Hunter, and the two become engrossed in the women’s suffrage movement. Miriam finds herself among women who are brave and determined enough to undergo hunger strikes and prison sentences. Vayne’s image is improved by his support of their cause, but Miriam is not deceived.

The trial of Vayne reveals his political ambitions in both England and Europe and heats up further when a crucial witness is found dead. During the medical examination, Miriam discovers evidence that will influence the case against Vayne, but is kidnapped by one of his crazed supporters before she can reveal it. Daniel leaves the trial and, in a desperate midnight drive, attempts to rescue her from a dangerous, sea-swept dungeon, putting their lives—and the case against Vayne—in peril.
Anne Perry is the bestselling author of two acclaimed series set in Victorian England: the William Monk novels and the Charlotte and Thomas Pitt novels. She is also the author of a series featuring Charlotte and Thomas Pitt's son, Daniel, including Three Debts Paid and Death with a Double Edge, as well as the Elena Standish series, including A Truth to Lie For and A Darker Reality; a series of five World War I novels; nineteen holiday novels (most recently A Christmas Legacy); and a historical novel, The Sheen on the Silk, set in the Byzantine Empire. She lives in Los Angeles.