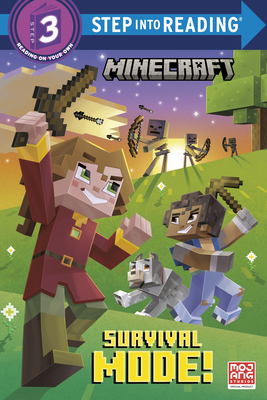 
Available at One of Our Locations
Reading is matter of survival with the only official Leveled Reader series based on Minecraft!
Bonus: Includes over 30 stickers!

Minecraft® is the best-selling video game of all time! And now learning to read has never been more fun for fans of the game ages 4 to 7. They'll get a great introduction to the game's Survival Mode when two players Emmy and Birch--and their tame wolf Byte--set out to explore, build, craft--and survive--in the epic expanse of the Overworld!
Step 3 readers feature engaging characters in easy-to-follow plots about popular topics for children who are ready to read on their own.
© 2021 Mojang AB and Mojang Synergies AB. MINECRAFT and MOJANG are trademarks or registered trademarks of Mojang Synergies AB.
Nick Eliopulos is a children’s book author. His works include Super Friends: Flying High and Gulliver’s Travels.

Alan Batson is a British cartoonist and illustrator. His works include Everything I Need to Know I Learned from a Star Wars Little Golden Book, Everything That Glitters is Guy!, and Baby McStuffins.