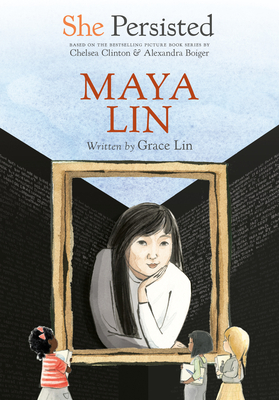 
Ships to Our Store in 1-5 Days
Inspired by the #1 New York Times bestseller She Persisted by Chelsea Clinton and Alexandra Boiger, a chapter book series about women who spoke up and rose up against the odds--including Maya Lin!

Maya Lin is known throughout the world as the creator of the Vietnam Veterans Memorial in Washington, DC. But many people objected to her gender, age, race, and more when she was chosen to design the memorial. Still, she persisted, and her design stands out today as one of the most memorable monuments in the country.

In this chapter book biography by bestselling and award-winning author Grace Lin, readers learn about the amazing life of Maya Lin--and how she persisted.

Complete with an introduction from Chelsea Clinton, black-and-white illustrations throughout, and a list of ways that readers can follow in Maya Lin's footsteps and make a difference!

And don’t miss out on the rest of the books in the She Persisted series, featuring so many more women who persisted, including Patsy Mink, Maria Tallchief, and more!
Grace Lin (she/her), a New York Times bestselling author/illustrator, won the Newbery Honor for Where the Mountain Meets the Moon and the Theodor Geisel Honor for Ling and Ting. Her novel When the Sea Turned to Silver was a National Book Award Finalist, and her picture book A Big Mooncake for Little Star was awarded the Caldecott Honor. Grace is also an occasional commentator for New England Public Radio, a reviewer for The New York Times, a video essayist for PBS NewsHour, and the speaker of the popular TEDx Talk “The Windows and Mirrors of Your Child’s Bookshelf,” as well as hosting the two podcasts: kidlitwomen* and Kids Ask Authors. In 2016, Grace’s art was displayed at the White House, where Grace herself was recognized by President Obama’s office as a Champion of Change for Asian American and Pacific Islander Art and Storytelling. You can visit Grace online at gracelin.com and follow her on Twitter and Instagram @pacylin.

Chelsea Clinton (she/her) is the #1 New York Times bestselling author of She Persisted, She Persisted Around the World, She Persisted in Sports, She Persisted in Science, Don't Let Them Disappear, It's Your World and Start Now!, as well as Grandma's Gardens and The Book of Gutsy Women, which she wrote with Hillary Clinton, and Governing Global Health with Devi Sridhar. Chelsea earned a master’s degree in public health from Columbia University’s Mailman School of Public Health, where she is now an adjunct assistant professor, and a PhD in international relations from Oxford University. She is also the Vice Chair of the Clinton Foundation, where she works on many initiatives, including those that help empower the next generation of leaders. She lives in New York City with her husband, Marc, their three children and their dog, Soren.

Gillian Flint (she/her) is an illustrator who has a passion for painting in watercolors. She has been drawing and creating characters for as long as she can remember. Her work has been published in the USA, the UK and Australia. In her spare time she enjoys reading and gardening at her home in the UK. You can visit Gillian online at gillianflint.com and follow her on Instagram @gillianflint_illustration.

Alexandra Boiger (she/her) has illustrated nearly twenty picture books, including the She Persisted series by by Chelsea Clinton; the popular Tallulah series by Marilyn Singer; and the Max and Marla books, which she also wrote. Originally from Munich, Germany, she now lives outside of San Francisco, California, with her husband, Andrea; daughter, Vanessa; and two cats, Luiso and Winter. You can visit Alexandra online at alexandraboiger.com and follow her on Instagram @alexandra_boiger.