Forgive Me Not (Hardcover) 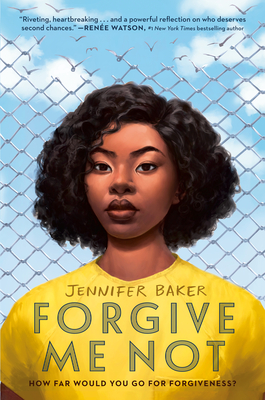 Forgive Me Not (Hardcover)


Coming Soon - Available for Preorder Now
In this searing indictment of the juvenile justice system, one incarcerated teen weighs what she is willing to endure for forgiveness.

All it took was one night and one bad decision for fifteen-year-old Violetta Chen-Samuels’ life to go off the rails. After driving drunk and causing the accident that kills her little sister, Violetta is incarcerated. Under the juvenile justice system, her fate lies in the hands of those she’s wronged—her family. With their forgiveness, she could go home. But without it? Well . . .

Denied their forgiveness, Violetta is now left with two options, neither good—remain in juvenile detention for an uncertain sentence or participate in the Trials. The Trials are no easy feat, but if she succeeds, she could regain both her freedom and what she wants most of all: her family’s love. In her quest to prove her remorse, Violetta is forced to confront not only her family’s grief, but her own—and the question of whether their forgiveness is more important than forgiving herself.
Jennifer Baker is a publishing professional of almost 20 years, creator/host of the Minorities in Publishing podcast, and faculty member of the MFA program in Creative Nonfiction at Bay Path University. Formerly a contributing editor to Electric Literature, she received a 2017 NYSCA/NYFA Fellowship and a Queens Council on the Arts New Work Grant for Nonfiction Literature. In 2019, she was named Publishers Weekly Superstar for her contributions to inclusion and representation in publishing. She has volunteered with organizations such as We Need Diverse Books and I, Too Arts Collective, and spoken widely on topics of inclusion, the craft of writing/editing, podcasting, and the inner-workings of the publishing industry. Her fiction, nonfiction, and criticism have appeared in various print and online publications.