With Love, From Cold World (Paperback) 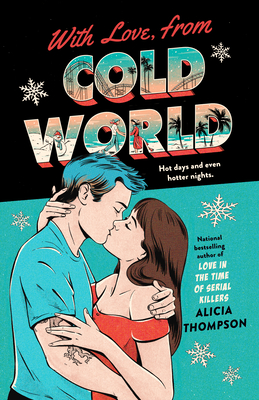 With Love, From Cold World (Paperback)


Coming Soon - Available for Preorder Now
She has a to-do list a mile long and falling for her coworker isn't on it—yet somehow he’s become her top priority in this romantic comedy from the national bestselling author of Love in the Time of Serial Killers.

Lauren Fox is the bookkeeper for Cold World, a tourist destination that's always a winter wonderland despite being located in humid Orlando, Florida. Sure, it’s ranked way below any of the trademarked amusement parks and maybe foot traffic could be better. But it’s a fun place to work, even if “fun” isn’t exactly Lauren’s middle name.

Her coworker Asa Williamson, on the other hand, is all about finding ways to enliven his days at Cold World—whether that means organizing the Secret Santa or teasing Lauren. When the owner asks Lauren and Asa to propose something (anything, really) to raise more revenue, their rivalry heats up as they compete to come up with the best idea. But the situation is more dire than they thought, and it might take these polar opposites working together to save the day. If Asa thought Lauren didn't know how to enjoy herself, he's surprised by how much he enjoys spending time together. And if Lauren thought Asa wasn't serious about anything, she's surprised by how seriously he seems to take her.

As Lauren and Asa work to save their beloved wintery spot, they realize the real attraction might be the heat generating between them.
Alicia Thompson is a writer, reader, and Paramore superfan. As a teen, she appeared in an episode of 48 hours in the audience of a local murder trial, where she broke the fourth wall by looking directly into the camera. She currently lives in Florida with her husband and two children.

“An electric, utterly unique workplace romance that burrowed deep into my heart, starring polar opposites with off-the-charts sexual tension and a truly unforgettable setting that feels like a character in itself. With Love, From Cold World is a steamy delight sure to keep you warm all through the winter. I need everything Alicia Thompson writes beamed directly into my brain.”—Rachel Lynn Solomon, New York Times bestselling author of Weather Girl

“Alicia Thompson writes stories that are so uniquely real to me, with characters who are flawed and lovable and achingly relatable, alongside writing that balances trauma and humor with incredible skill and heart. I was invested in Lauren, Asa, and the quirky world of Cold World from the jump, and I loved their story every step of the way. A new forever favorite.”—Anita Kelly, author of Love & Other Disasters

"I fell hard for the characters in this world--Asa and Lauren are complicated and flawed and so easy to root for, and I loved watching them become tentative friends, passionate lovers, and, finally, committed, confident partners to each other. Imaginative and sexy and thoughtful, With Love, From Cold World will warm you from the inside out."—Kate Clayborn, author of Love at First