Delete That: (and Other Failed Attempts to Look Good Online) (Hardcover) 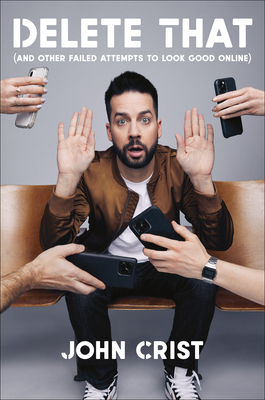 Delete That: (and Other Failed Attempts to Look Good Online) (Hardcover)


Ships to Our Store in 1-5 Days
A candid and irreverent look at the ridiculous ways we all try to make ourselves look better online—from a popular standup and internet comedian whose videos have been viewed over one billion times.

“John is one of my top-three all-time favorite comedians, next to me and Foxworthy. Buy this book—you’ll be glad you did.”—Larry the Cable Guy

John Crist wasn’t always recognizable as “the guy from that hilarious video in the grocery store.” Growing up part of a homeschool family of ten in rural Georgia with Mennonite grandparents and a high-school job at Chick-fil-A, he was an unlikely candidate for internet fame. Despite all that, or perhaps because of it, Crist passionately pursued his dream of stand-up comedy.

In his first book, Crist offers heartfelt, laugh-out-loud observations on the absurd ways we all try to make ourselves look better online: like how we all post filtered pictures of our super healthy kale salads but somehow neglect to post about our 1 A.M. Uber Eats Big Mac. Or how quick we all are to post our “I Voted” sticker pictures but fail to post about the ways we vote with our dollars every day in ways that don’t align with our loudly and publicly espoused values.

With self-deprecating wit, Crist chronicles his meteoric rise as an online and stand-up comedian, but he doesn’t gloss over the ways his own life choices did not align with his online image—a gap between perception and reality that eventually led to a stint in rehab.

In Delete That, Crist takes responsibility for his actions, offers some reflections on how to do better, and encourages us all to stop capitulating to the fear of “But what will they think?!” Instead, this book offers a bold invitation to stop curating life and start living it . . . one Nickelback concert at a time.
John Crist is one of today’s most popular stand-up comedians, with more than one billion video views and over five million fans on social media. Known for his viral videos like “Weather Man Melts Down on Live TV,” “Every Parent at Disney,” and “Brands That Need to Be Cancelled Immediately,” Crist has also performed at sold-out shows from coast to coast. Crist’s work has been featured on the Today show, Fox & Friends, and hundreds of other prominent outlets like Sports Illustrated, USA Today, CBS Sports, Barstool Sports, the Golf Channel, and ESPN. In 2022, Crist released his highly anticipated comedy special, What Are We Doing?, on YouTube and launched a weekly podcast called Net Positive. John Crist, who proudly grew up in a homeschool family of ten in Georgia, now lives in Nashville.
“If this book is like everything else John does, it’ll be a bestseller, which irritates me because he’s good-looking, funny, and clever. It’s like he went to the comic buffet and took everything. ‘Hey, John, take one item and move on!’ He’s one of my top-three all-time favorite comedians, next to me and Foxworthy. Buy this book—you’ll be glad you did. Then check out my website for all my tour dates.”—Larry the Cable Guy

“What I saw in you is authenticity and that fascinated me.”—Bert Kreischer

“One of the more important interviews I’ve conducted was with John Crist. He’s absolutely hilarious, one of the funniest people I’ve ever met!”—Marty Smith, ESPN host and reporter