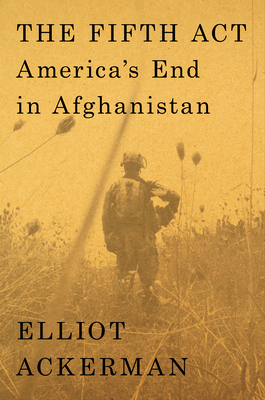 
Available at One of Our Locations
“The American betrayal of Afghanistan took twenty years. Elliot Ackerman, a participant and witness, tells the story with unsparing honesty in this intensely personal chronicle.” —George Packer

A powerful and revelatory eyewitness account of the American collapse in Afghanistan, its desperate endgame, and the war’s echoing legacy

Elliot Ackerman left the American military ten years ago, but his time in Afghanistan and Iraq with the Marines and later as a CIA paramilitary officer marked him indelibly. When the Taliban began to close in on Kabul in August 2021 and the Afghan regime began its death spiral, he found himself pulled back into the conflict. Afghan nationals who had worked closely with the American military and intelligence communities for years now faced brutal reprisal and sought frantically to flee the country with their families. The official US government evacuation effort was a bureaucratic failure that led to a humanitarian catastrophe. With former colleagues and friends protecting the airport in Kabul, Ackerman joined an impromptu effort by a group of journalists and other veterans to arrange flights and negotiate with both Taliban and American forces to secure the safe evacuation of hundreds. These were desperate measures taken during a desperate end to America's longest war. For Ackerman, it also became a chance to reconcile his past with his present.

The Fifth Act is an astonishing human document that brings the weight of twenty years of war to bear on a single week, the week the war ended. Using the dramatic rescue efforts in Kabul as his lattice, Ackerman weaves a personal history of the war's long progression, beginning with the initial invasion in the months after 9/11. It is a play in five acts, the fifth act being the story’s tragic denouement, a prelude to Afghanistan's dark future. Any reader who wants to understand what went wrong with the war’s trajectory will find a trenchant account here. But The Fifth Act also brings readers into close contact with a remarkable group of characters, American and Afghan, who fought the war with courage and dedication, and at great personal cost. Ackerman's story is a first draft of history that feels like a timeless classic.
Elliot Ackerman is the New York Times bestselling author of the novels 2034, Red Dress In Black and White, Waiting for Eden, Dark at the Crossing, and Green on Blue, as well as the memoir Places and Names: On War, Revolution and Returning. His books have been nominated for the National Book Award, the Andrew Carnegie Medal in both fiction and nonfiction, and the Dayton Literary Peace Prize among others. He is both a former White House Fellow and Marine, and served five tours of duty in Iraq and Afghanistan, where he received the Silver Star, the Bronze Star for Valor, and the Purple Heart. He divides his time between New York City and Washington, D.C.
“A master of his genre . . . among the best in war literature, like Norman Mailer’s The Naked and the Dead or Hemingway. Read this book.” —Bernard-Henri Lévy, Tablet

“Ackerman’s prose successfully transports the reader to the battlefield and into the midst of ambiguities facing young combatants required to make life-and-death decisions. He writes lovingly of his comrades, bringing them to life and heightening the poignancy of the stories he tells.” —Foreign Affairs

“The quality of the writing stands out. . . . part of a distinguished and growing literature by American veterans trying to understand the experience of those who served. . . . The Fifth Act’s contribution to understanding the war lies foremost in passages of reflection and well-chosen quotes . . . They give pause and offer a window into deeper thought.” —Washington Post

“When it comes to parsing the complexities of our modern wars—Iraq, Syria, Afghanistan—and articulating the cost of so many strategic lapses and sheer moral failures, no one compares to Elliot Ackerman . . . He has a unique ability to center his and his comrades’ lived experience within the larger historical continuum.” —Washington Review of Books

“The Fifth Act is among the best books about war that I've ever read.” —Michael Morell, former Director, CIA.

“Ackerman is thoughtful and regretful, a man who cares deeply for the people he believes he and his buddies in the Marines and the CIA fought for . . . Ackerman scours his WhatsApp and Signal threads in a vivid retelling of the failures and successes that provided the all-too-human dimension of the evacuation efforts. The tension and drama unfold like a movie script: a pacey, urgent, heart-in-throat, will-they-make-it-this-time narrative.”—Foreign Policy

“Elliot Ackerman’s The Fifth Act may be the first great book about the Afghanistan war . . . This is the work of an outstanding writer.” —The Objective Standard

“Ackerman is one of the finest writers of his generation, having brilliantly penned literary reflections on war and meaning—a quality that carries through to his latest book. It is not often that I finish a book in one sitting, and even rarer that I put a book down and know it will stay with me long after I finish it. Ackerman’s The Fifth Act does both. It is powerful, poignant, personal, and painful. His personal narrative of combat and how it stays with him today—especially during the effort to evacuate Afghans in the run-up to the collapse—is haunting and should be widely read.” —Diplomatic Courier

“If you want to understand how the war in Afghanistan became such a debacle, this book is indispensable. Elliot Ackerman brilliantly explores last year’s fall of Kabul through his own experiences on the battlefield, expertly interwoven with his dramatic attempts from afar to evacuate, and thus keep from falling into the hands of the Taliban, Afghan nationals who had worked with the U.S. How much he succeeds in this endeavor gives the book its narrative tension, and along the way Ackerman reflects persuasively on who is to blame for the Taliban takeover.” —Air Mail

“All of Ackerman’s works are essential reading for various reasons, but The Fifth Act is at the top of the list.” —Tulsa People

“[A] haunting memoir . . . a harrowing portrait of chaos and collapse . . . Writing in evocative, gripping prose . . . Ackerman provides a clear-eyed indictment of America’s failures in Afghanistan while paying homage to the soldiers who fought there. The result is a moving elegy for a blighted struggle.” —Publishers Weekly

“Making sense of chaos is never easy, but this powerful book does much to explain why America’s debacle in Afghanistan ended the way it did . . . Courage and folly, dedication and tragedy: Ackerman deftly captures all dimensions of a protracted foreign policy failure . . . A must-read account of the end of America’s longest war.” —Kirkus (starred review)

“The history of the American invasion and occupation of Afghanistan is only beginning to be written, and it will likely be decades before a fuller picture emerges. But an early and important voice in that story will be that of writer and veteran Elliott Ackerman, who served in both Iraq and Afghanistan. The history of any war will always be an ongoing collation of subjectivities—as such Ackerman brings his own deeply personal perspective as a marine (and later as a CIA paramilitary officer) who returns to Afghanistan on the eve of its return to the Taliban to help in impromptu, large-scale evacuations. Ackerman then works backward to look at 20 years of American misadventure in the Middle East, and the deep impact it has on two decades of his life.” —Literary Hub

“Powerful testimony to what went wrong despite the bravery of American military personnel and our Afghan Allies . . . Ackerman’s tales are compelling and heartfelt; this title will stand the test of time as a warning against further military misadventures.” —Booklist

“The American betrayal of Afghanistan took twenty years. Elliot Ackerman, a participant and witness, tells the story with unsparing honesty in this intensely personal chronicle.” —George Packer, author of The Assassins’ Gate: America in Iraq and The Unwinding: An Inner History of the New America