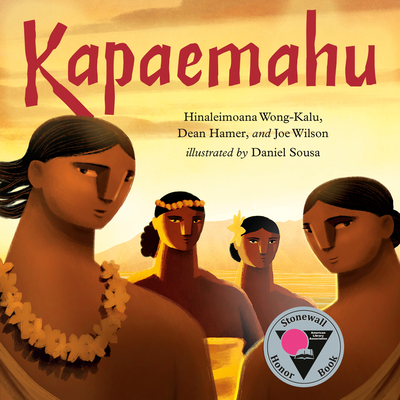 “This extraordinary book recounts the arrival of four healers to Waikiki centuries ago and the stone monuments that represent them. Colonization attempted to bury the stones, but now readers all over the world can learn of their power and origins.”
— Andrew King, Secret Garden Bookshop, Seattle, WA

An Indigenous legend about how four extraordinary individuals of dual male and female spirit, or Mahu, brought healing arts from Tahiti to Hawaii, based on the Academy Award–contending short film.

In the 15th century, four Mahu sail from Tahiti to Hawaii and share their gifts of science and healing with the people of Waikiki. The islanders return this gift with a monument of four boulders in their honor, which the Mahu imbue with healing powers before disappearing.

As time passes, foreigners inhabit the island and the once-sacred stones are forgotten until the 1960s. Though the true story of these stones was not fully recovered, the power of the Mahu still calls out to those who pass by them at Waikiki Beach today.

With illuminating words and stunning illustrations by Hinaleimoana Wong-Kalu, Dean Hamer, Joe Wilson, and Daniel Sousa, KAPAEMAHU is a monument to an Indigenous Hawaiian legend and a classic in the making.
Hinaleimoana Wong-Kalu is a Native Hawaiian teacher, cultural practitioner, and filmmaker who uses digital media to protect and perpetuate Indigenous languages and traditions. She began her film work as an advisor for the award-winning films Kumu Hina and A Place in the Middle, and received a National Education Association Human Rights Award, Native Hawaiian Educator of the Year, and White House Champion of Change Award for the groundbreaking impact campaigns associated with those films. Hina produced the PBS/ARTE feature documentary Leitis in Waiting and award-winning short "Lady Eva" about her transgender sisters in the Kingdom of Tonga. Hina is also a transgender health advocate, burial council chair, and composer of “Ku Haaheo E Kuu Hawaii,” the internationally-known anthem for the protection of Mauna Kea, which was honored as Hawaiian Song of the Year in the 2020 Na Hoku Hanohano Awards, known as the Hawaiian Grammys.

Daniel Sousa is an Academy Award–nominated animator who uses the themes embedded in myths and legends to examine archetypes of human nature. Born in Cape Verde, he approaches filmmaking from a painter’s perspective, focusing on the fragility of fleeting moments, memories and perceptions. His short films include Feral, which was supported by a Creative Capital Foundation grant and screened at Sundance, and Fable, which won awards at festivals around the world. He recently completed animating several native legends for the four-part PBS special Native America, which weaves history and science with living indigenous traditions. Sousa has taught at the Rhode Island School of Design, Harvard University, the Museum School, the Art Institute of Boston and the Animation Workshop in Denmark.
COVER MAY VARY.

A Stonewall Honor Book!
A School & Library Journal Best Picture Book of the Year!
A Shelf Awareness Best Children’s & YA of 2022!

★ “...a fine read-aloud in conjunction with a history lesson on Hawaii, its people, their language, and the colonization that occurred." — School & Library Journal, starred review.

“Sousa’s illustrations portray the healers as chiseled, monumental forms reminiscent of the stones that house their spirits; the inky shadows and rich red-gold light of the ancient tale contrasts dramatically with the sand-reflected brightness of modern Waikiki.” — BCCB

“A beautiful, important book that not only offers indigenous representation, but also underscores the long history and deep importance of nonbinary people in certain cultures.” — Mombian

“The picture book’s stunning sepia-toned illustrations, which match the film, combined with the simple but powerful text, make this an excellent introduction to Indigenous Hawaiian culture and to the mahu and third gender people.” — Book Riot