The Long Reckoning: A Story of War, Peace, and Redemption in Vietnam (Hardcover) 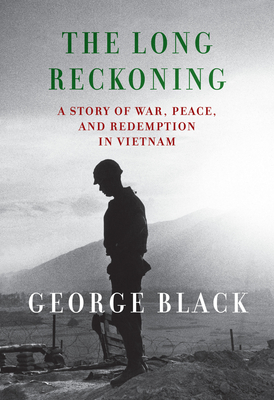 The Long Reckoning: A Story of War, Peace, and Redemption in Vietnam (Hardcover)


Coming Soon - Available for Preorder Now
The moving story of how a small group of people—including two Vietnam veterans—forced the U.S. government to take responsibility for the ongoing horrors—agent orange and unexploded munitions—inflicted on the Vietnamese.

The American war in Vietnam has left many long-lasting scars that have not yet been sufficiently examined. The worst of them were inflicted in a tiny area bounded by the demilitarized zone between North and South Vietnam and the Ho Chi Minh Trail in neighboring Laos. That small region saw the most intense aerial bombing campaign in history, the massive use of toxic chemicals, and the heaviest casualties on both sides.

In The Long Reckoning, George Black recounts the inspirational story of the small cast of characters—veterans, scientists, and Quaker-inspired pacifists, and their Vietnamese partners—who used their moral authority, scientific and political ingenuity, and sheer persistence to attempt to heal the horrors that were left in the wake of the military engagement in Southeast Asia. Their intersecting story is one of reconciliation and personal redemption, embedded in a vivid portrait of Vietnam today, with all its startling collisions between past and present, in which one-time mortal enemies, in the endless shape-shifting of geopolitics, have been transformed into close allies and partners.

The Long Reckoning is being published on the fiftieth anniversary of the day the last American combat soldier left Vietnam.
GEORGE BLACK is the author of seven previous books on subjects including India, China, and foreign policy. His writing has appeared in The New Yorker, The New York Times Magazine, and many other publications. He lives in New York City.
“There’s a world of books about the American war in South Asia, about what we did to its people and to ourselves. The Long Reckoning is different, a vivid, deeply researched account of some extraordinary Americans who have devoted themselves to undoing what they can of all that appalling damage.”—Geoffrey C. Ward, co-author of The Vietnam War: An Intimate History

“Fifty years after the last U.S. service member left Vietnam, the scars of that war remain. George Black traces the topography of those scars in this remarkable story of a group of individuals determined to heal those enduring wounds. He also proves that some of the finest literature of the Vietnam War is still being written.”—Elliot Ackerman, author of The Fifth Act

“George Black has given us a deeply moving book that embeds the story of his characters both in a new analysis of why the American War was so destructive and in an evocative portrait of modern Vietnam. The Long Reckoning is a must read to better understand the tragedy of this flawed war.”—Craig McNamara, author of Because Our Fathers Lied

“George Black’s masterpiece, The Long Reckoning, illuminates the Vietnam War’s twin legacies — Agent Orange and leftover bombs — that even now continue destroying the lives of Vietnamese citizens and U.S. veterans. With color and empathy, Black weaves a vivid story of real people, providing a fresh, thoughtful look at a painful war’s long aftermath. It’s a spell-binding read, full of insight, horror, goodness and bravery.”—Ted Osius, former U.S. ambassador to Vietnam and the author of Nothing Is Impossible: America’s Reconciliation with Vietnam

“The Vietnam war never really goes away. It hides, and then the scab gets torn off again. The Long Reckoning is about many things, but at its heart it's about Agent Orange, and the damage that chemical did, and continues to do, to the bodies and souls of two nations. Movingly, morally, George Black tamps down his story to a handful of people, though principally two American vets. One is a wounded warrior, the other served in military intelligence. They meet now at the bridge of wanting to help make right that which was so wrong.”—Paul Hendrickson, author of The Living and the Dead: Robert McNamara and Five Lives of a Lost War

“The Long Reckoning is the crucial and necessary history of the lethal legacy of the American war in Vietnam. George Black reveals how and why the U.S. sprayed millions of gallons of toxic chemicals across Vietnam, seeded the soil with mines, dropped millions of tons of bombs and then refused to help clean up the vast wasteland. The heart of the book is the countless Vietnamese whose lives have been upended by this nightmare. The unlikely heroes include American veterans of the Vietnam War who spent decades charting a path to the book’s reckoning, eventually nudging a reluctant American government to begin cleansing Vietnam’s poisoned land and healing those who carry the wounds.”—Elizabeth Becker, author of You Don’t Belong Here: How Three Women Rewrote the Story of War

“The Long Reckoning is the brilliant book you need to read to know all you ever need to know, feel all you ever need to feel, about America’s blood-soaked imperial errand to Vietnam and its disastrous consequences. Beg, borrow, buy or steal this book.”—Peter Davis, Academy Award-winning filmmaker of Hearts and Minds

“Out of a tragic past war that sees no discharge for its survivors and their descendants, George Black gives us a moving tale of unknown heroes who provide hope and redemption out of the abyss. For all of those who suffered and continue to suffer as a result of America’s Vietnam War, this is the book we've been waiting for.”—Lien-Hang T. Nguyen, Director of the Weatherhead East Asian Institute at Columbia University

“The Long Reckoning is woven around the lives of two remarkable veterans, Chuck Searcy and Manus Campbell, who returned to Vietnam in search of reconciliation and redemption. George Black’s account of their unflinching efforts to confront and lessen the ongoing devastation caused by the U.S. war in Indochina awakens us to a vast history and a stunning cast of characters--Vietnamese and American, women and men, old and young. Captivating, revelatory, and inspiring, there is nothing like it in the vast literature of the war.”—Christian G. Appy, author of Patriots: The Vietnam War Remembered from All Sides

“One of the best recent books on a war that ended half a century ago but that still reverberates . . . Black sets much of this vivid narrative on the ground, painstakingly documenting the death-dealing technology America deployed against an enemy—and a civilian populace—that was vastly outgunned but bent on victory. . . . Just as effective is the author’s account of the politics of international aid and the people who joined, with the two veterans, in their expiatory efforts.”—Kirkus Reviews (starred review)