Bruno's Challenge: And Other Stories of the French Countryside (Bruno, Chief of Police Series) (Hardcover) 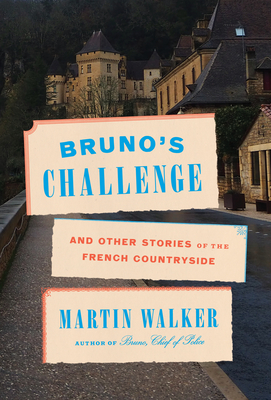 Bruno's Challenge: And Other Stories of the French Countryside (Bruno, Chief of Police Series) (Hardcover)

Martin Walker presents his first collection of stories featuring all the familiar characters from his Bruno novels and the glories of the Périgord region of France, with ample helpings of food and wine.

After a prisoner breaks parole to see his son on Christmas, Bruno must track him down before he throws away his chance at eventual freedom. When a Senegalese man’s coffee sells superbly at the market, some café owners become incensed by the new competition and take matters into their own hands. As a Swiss tourist and a St. Denis native fall in love over the fruit-and-veggie stall, one of their family members takes drastic steps to break them up. A fledgling tour bus business is sabotaged, leading Bruno to take a closer look at a town love triangle. Called in to investigate a case of stolen oysters, our beloved policeman reunites with an old flame to catch the shellfish thieves.

In story after story, Bruno settles town disputes, mediates family quarrels, and tracks down lawbreakers in his adored village of St. Denis and its environs. Featured meals in the collection include a fatty Christmas goose, a savory nettle soup with crème fraîche, and a fluffy quiche Lorraine.
MARTIN WALKER, after a long career of working in international journalism and for think tanks, now gardens, cooks, explores vineyards, writes, travels, and has never been more busy. He divides his time between Washington, D.C., and the Dordogne.

“Fans of The Coldest Case and Walker’s other novels set in the little French market town of St. Denis will savor this inviting story collection. . . . Culinary mystery aficionados won’t want to miss this one.”—Publishers Weekly

“Like all of Walker’s writing . . . these glimpses are rich in atmosphere and an almost visceral perception of the sympathy and compromise that bond a group of neighbors into a community. Page after page, Walker writes some of the best prose in the genre, attending to both human relationships and the texture of everyday life with a sensuous appreciation. Whether preparing nettle soup, liaising with the Police Nationale or reading boar scat, Bruno remains focused and efficient. . . . Turn immediately to Martin Walker’s new platter of delicious morsels.”—Michael Sims, The Washington Post