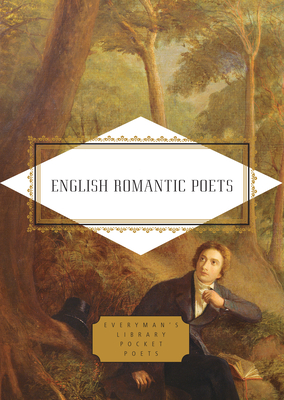 
Available at One of Our Locations
A greatest-hits selection from some of the most popular poets in the English language, in a gorgeously-jacketed small hardcover.

William Wordsworth defined good poetry as “the spontaneous overflow of powerful feelings,” and no generation of poets has felt more powerfully than the Romantics of the late eighteenth and early nineteenth centuries.  In this indispensable volume, Sir Jonathan Bate—prizewinning biographer of Wordsworth, Keats and John Clare—brings together the most loved poems of the age, together with many forgotten gems. Alongside classics such as Coleridge’s “Kubla Khan” and “Frost at Midnight”, the immortal odes of Keats, and generous selections from Wordsworth’s Lyrical Ballads and The Prelude, the reader will rediscover the wit of Byron, the wildness of Blake, the passion of Shelley, a wealth of nature poems by Clare, and the distinctive voices of women Romantics such as Charlotte Smith, Mary Robinson, Felicia Hemans, Dorothy Wordsworth, and Letitia Elizabeth Landon.

Everyman's Library pursues the highest production standards, printing on acid-free cream-colored paper, with full-cloth cases with two-color foil stamping, decorative endpapers, silk ribbon markers, European-style half-round spines, and a full-color illustrated jacket.
SIR JONATHAN BATE is an academic, broadcaster, critic, novelist, and prize-winning author of biographies of Wordsworth, Keats, and John Clare. He is the Foundation Professor of Environmental Humanities at Arizona State University, as well as a Senior Research Fellow at the University of Oxford, where he holds the title of Professor of English Literature. Until September 2019 he was Provost of Worcester College, Oxford. He was knighted in 2015 for services to literary scholarship and higher education.