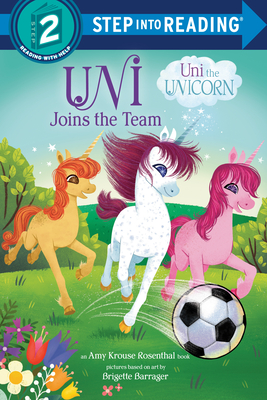 
Available at One of Our Locations
Uni the Unicorn for early readers! Another exciting Step 2 Reader about teamwork featuring the most popular sport for kids!

Uni loves playing sparkle ball and is very good at it! But Goldie and Silky want to play soccer. Uni has never played soccer before. It doesn't look fun, and there are unicorns Uni doesn't know. Uni tries but makes mistakes. Uni sees a new friend mess up, too, and encourages him to keep trying and to believe in himself. Trying something new is fun when you work together!

Fans of the picture books, as well as new Uni fans, will be excited to join this bighearted unicorn and friends on a new adventure of learning about caring for another and believing in oneself.

Step 2 readers use basic vocabulary and short sentences to tell simple stories. They are perfect for children who recognize familiar words and can sound out new words with help.
AMY KROUSE ROSENTHAL was born in 1965 and graduated from Tufts University. A prolific writer, speaker, filmmaker, and radio show host, she also contributed to TED Talks and wrote numerous adult and children's books, including picture books about Uni the unicorn. She announced on March 3, 2017, that she was terminally ill with cancer. She lived in Chicago with her husband and children. Her essay for the Modern Love column in the New York Times, entitled "You May Want to Marry My Husband," went viral online. She died on March 13, 2017.

BRIGETTE BARRAGER graduated from CalArts with a BFA in character animation in 2007. She likes tea and books and general old lady-ish stuff, and hates when people's toes hang over the edge of their sandals. Visit her at brigetteb.blogspot.com.