A Valentine for Uncle Jim (Paperback) 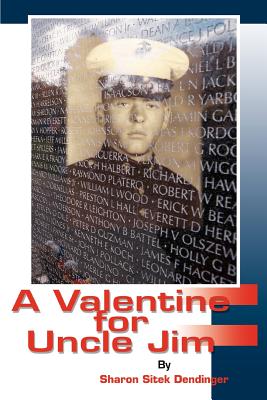 A Valentine for Uncle Jim (Paperback)


Ships to Our Store in 1-5 Days
(This book cannot be returned)
On February 14th, 1969, Second Lieutenant James Patrick Witt, of the United States Marine Corps, became one of the 58,000 American casualties of the Vietnam War. The anniversary of his death on Valentine's Day, even after twenty-five years, continues to be extremely painful for the soldier's survivors. Although born after his Uncle Jim's death, Patrick Cicerchi has grown up in awe of his war-hero Uncle, and has felt a strong tie to him. When Patrick is given a school assignment to write an essay about someone who has influenced his life, and when the project is due on February 14th. Patrick knows that he must write about Uncle Jim.

A Valentine for Uncle Jim, is the true story of 2LT Jim Witt, recipient of the Silver Star, the Bronze Star, and the Purple Heart Medals. It contains historical data presented within the framework of a novel. It is a book with universal appeal, written for both young adults and for those who lived through the Vietnam War years.

Contained in this book is a teaching guide, which lends itself to classroom instructional application with middle school and high school students.

Proceeds from the sale of this book will be donated by the author, to the D.O.V.E. Fund (Development of Vietnam Endeavors), a non-profit corporation, in loving memory of her childhood friend, Jim Witt.