The Best American Essays Of The Century (Paperback) 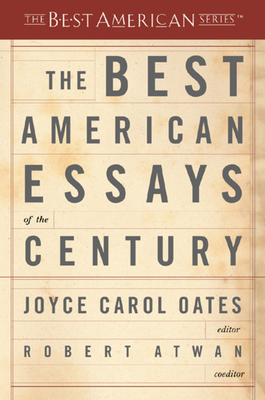 The Best American Essays Of The Century (Paperback)


Ships to Our Store in 1-5 Days
This singular collection is nothing less than a political, spiritual, and intensely personal record of America’s tumultuous modern age, as experienced by our foremost critics, commentators, activists, and artists. Joyce Carol Oates has collected a group of works that are both intimate and important, essays that move from personal experience to larger significance without severing the connection between speaker and audience.
From Ernest Hemingway covering bullfights in Pamplona to Martin Luther King, Jr.’s “Letter from Birmingham Jail,” these essays fit, in the words of Joyce Carol Oates, “into a kind of mobile mosaic suggest[ing] where we’ve come from, and who we are, and where we are going.” Among those whose work is included are Mark Twain, John Muir, T. S. Eliot, Richard Wright, Vladimir Nabokov, James Baldwin, Tom Wolfe, Susan Sontag, Maya Angelou, Alice Walker, Joan Didion, Cynthia Ozick, Saul Bellow, Stephen Jay Gould, Edward Hoagland, and Annie Dillard.

JOYCE CAROL OATES is the recipient of the PEN/Malamud Award for Excellence in Short Fiction and the winner of the National Book Award. Among her major works are We Were the Mulvaneys, Blonde, and The Falls.

". . . Oates has assembled a provocative collection of masterpieces reflecting both the fragmentation and surprising cohesiveness of various American identities." Publishers Weekly, Starred —