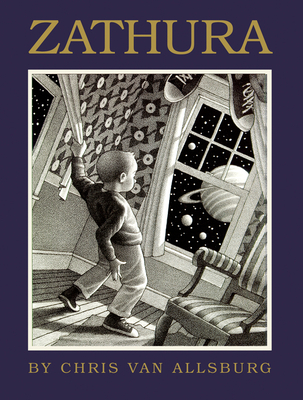 The beautiful companion to Chris Van Allsburg's Caldecott Medal-winning Jumanji—a tale of intergalactic adventure and sibling rivalry where a roll the dice transports two brothers to the mythical land of Zathura.

Taking place where Jumanji ended, older brother Walter warns his pesky little brother Danny not to bring home the mysterious board game they find at the park. But when Danny’s curiosity gets the better of him, the brothers have to battle homicidal robots, Zyborg pirates, and giant meteors in their living room!

Will this dynamic duo learn to work together before it’s too late? In double spread illustrations that shimmer against the surreal events of the story, readers will be holding their breath with each new threat the boys face in the satisfying enigma that is Zathura.

Like Jumanji, Zathura is also the inspiration of a popular major motion picture, now available for streaming.

Chris Van Allsburg is one of America’s most innovative picture book creators. He is perhaps best known for the contemporary classic The Polar Express, which received the Caldecott Medal in 1985 and was made into a blockbuster movie starring Tom Hanks. He also received the Caldecott Medal for Jumanji, which was made into a popular feature film in 1996 and again in 2017. He also received a Caldecott Honor for his very first book, The Garden of Abdul Gasazi. He has received the Regina Medal for lifetime achievement in children’s literature, a National Book Award, and a Society of Illustrators Lifetime Achievement Award, among other honors. He lives outside of Boston, Massachusetts. Visit him at chrisvanallsburg.com.

On the twentieth anniversary of Jumanji, Van Allsburg picks up right where his Caldecott Medal book left off, with similarly terrifying adventure set this time in outer space.
Booklist, ALA, Starred Review

"Van Allsburg illustrates the surreal events in a grainy charcoal-black that seems to shimmer on a rough, cream-colored ground...Zathura, like Jumanji, is a satisfying enigma." Publishers Weekly

“Van Allsburg is a terrific illustrator, and his images here, including one where the boys open their front door and are greeted with a breathtaking views of the cosmos, are memorable.” The New York Times Book Review

“The angles of view, are, as always, wonderfully dramatic…” Kirkus Reviews

“One can’t help but anticipating the encore.” School Library Journal —