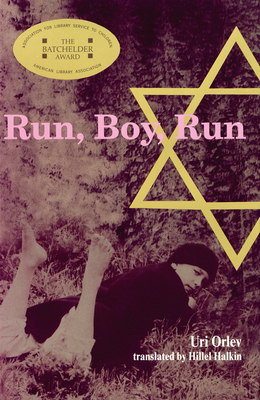 
Ships to Our Store in 1-5 Days
“'Srulik, there’s no time. I want you to remember what I’m going to tell you. You have to stay alive. You have to! Get someone to teach you how to act like a Christian, how to cross yourself and pray. . . . The most important thing, Srulik,' he said, talking fast, 'is to forget your name. Wipe it from your memory. . . . But even if you forget everything—even if you forget me and Mama—never forget that you’re a Jew.'"

And so, at only eight years old, Srulik Frydman says goodbye to his father for the last time and becomes Jurek Staniak, an orphan on the run in the Polish countryside at the height of the Holocaust. With the danger of capture by German soldiers ever-present, Jurek must fight against starvation, the punishing Polish winters, and widespread anti-Semitism as he desperately searches for refuge. Told with the unflinching honesty and unique perspective of such a young child, Run, Boy, Run is the extraordinary account of one boy’s struggle to stay alive in the face of almost insurmountable odds—a story all the more incredible because it is true.

Uri Orlev was born in Warsaw in 1931. In 1996, Uri Orlev received the the highest international recognition given to an author of children’s books. He now lives in Jerusalem.

"The narrative is simple and spare, factual about everything from hunting with a slingshot to making a fire with a piece of glass, and it's always true to the viewpoint of a boy who thinks he's 'about nine.'" Booklist, ALA, Starred Review

"...the story is totally engrossing as it vividly describes the hardships faced by so many youngsters during the war. Orlev has once again successfully used historical fiction to illustrate the Holocaust experience." School Library Journal

"Part of the strength of Orlev's writing rests with its spareness...in this novel of heartbreaking resilience." Horn Book

"This is one of the better examples of Holocaust fiction in depicting the vagaries of human nature as villainous and heroic acts emerge unexpectedly, even casually, from a shifting wartime population threatened with catastrophe." The Bulletin of the Center for Children's Books

"Orlev...devotes this memorable novel to the extraordinary true story of an orphaned Jewish boy's experiences in Poland during the war." Publishers Weekly —