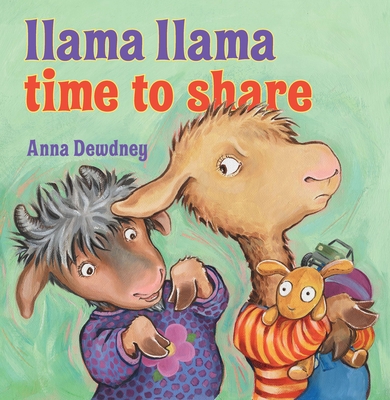 
Available at One of Our Locations
Llama has a sharing drama!

Build a tower. Make a moat.
Nelly's dolly sails a boat.
What can Llama Llama add?
Maybe sharing's not so bad.

Llama Llama has new neighbors! Nelly Gnu and her mama stop by for a play date, but Llama's not so sure it's time to share all his toys. Maybe just his blocks? It could be fun to make a castle with Nelly . . . But wait--Nelly has Llama's little Fuzzy Llama! The fun turns to tears when Fuzzy Llama is ripped in two, "all because of Nelly Gnu!" Mama comes to the rescue and fixes Fuzzy, but she makes it clear: "I'll put Fuzzy on the stairs, until you're sure that you can share."

Fun to read aloud and helpful to children and parents alike, Llama Llama Time to Share is for any child who needs a little encouragement in sharing.
Anna Dewdney was a teacher, mother, and enthusiastic proponent of reading aloud to children. She continually honed her skills as an artist and writer and published her first Llama Llama book in 2005. Her passion for creating extended to home and garden and she lovingly restored an 18th century farmhouse in southern Vermont. She wrote, painted, gardened, and lived there with her partner, Reed, her two daughters, two wirehaired pointing griffons, and one bulldog. Anna passed away in 2016, but her spirit will live on in her books.
Praise for Llama Llama Time to Share by Anna Dewdney:

"A solid addition to the popular series for toddlers and preschoolers." —Kirkus

"This picture book will be a pleasure to share with friends, old and gnu." —School Library Journal