Underground Asia: Global Revolutionaries and the Assault on Empire (Paperback) 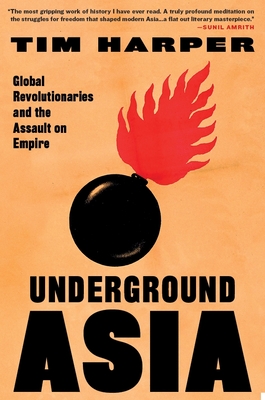 Underground Asia: Global Revolutionaries and the Assault on Empire (Paperback)

"Superbly original...Breaks new ground by showing how a collective consciousness emerged among revolutionaries."
--The Economist "A clearly written, brilliantly researched examination of the people and movements that shaped Asia's course in the 20th century and continue to influence the continent today."
--Walter Russell Mead, Wall Street Journal "The most gripping work of history I have ever read. It is a truly profound meditation on the struggles for freedom that shaped modern Asia...a flat out literary masterpiece."
--Sunil Amrith, author of Unruly Waters European empires had not yet reached their zenith when Asian radicals planted the seeds of their destruction. They gained energy and recruits after the Bolshevik Revolution, which sparked visions of a free and radically equal world. Thanks to cheap printing presses and the new possibility of international travel, these utopian revolutionaries built clandestine webs of resistance from London and Paris to Calcutta, Bombay, Hanoi, and Shanghai. Tim Harper takes us into this shadowy world, following the interconnected lives of Asian Marxists, anarchists, and nationalists such as M. N. Roy, Ho Chi Minh, and Tan Malaka. Underground Asia shows for the first time how these national liberation movements crucially depended on global action and reveals how these insurgencies shape the region to this day.