This Vast Southern Empire: Slaveholders at the Helm of American Foreign Policy (Paperback) 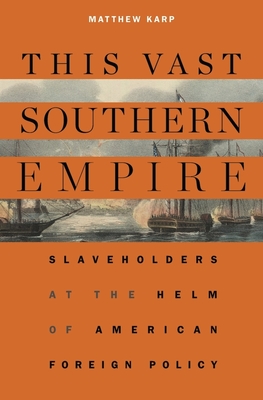 When the United States emerged as a world power in the years before the Civil War, the men who presided over the nation's triumphant territorial and economic expansion were largely southern slaveholders. As presidents, cabinet officers, and diplomats, slaveholding leaders controlled the main levers of foreign policy inside an increasingly powerful American state. This Vast Southern Empire explores the international vision and strategic operations of these southerners at the commanding heights of American politics. "At the close of the Civil War, more than Southern independence and the bones of the dead lay amid the smoking ruins of the Confederacy. Also lost was the memory of the prewar decades, when Southern politicians and pro-slavery ambitions shaped the foreign policy of the United States in order to protect slavery at home and advance its interests abroad. With This Vast Southern Empire, Matthew Karp recovers that forgotten history and presents it in fascinating and often surprising detail."
--Fergus Bordewich, Wall Street Journal "Matthew Karp's illuminating book This Vast Southern Empire shows that the South was interested not only in gaining new slave territory but also in promoting slavery throughout the Western Hemisphere."
--David S. Reynolds, New York Review of Books