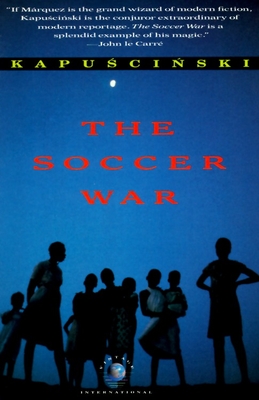 Part diary and part reportage, The Soccer War is a remarkable chronicle of war in the late twentieth century. Between 1958 and 1980, working primarily for the Polish Press Agency, Kapuscinski covered twenty-seven revolutions and coups in Africa, Latin America, and the Middle East. Here, with characteristic cogency and emotional immediacy, he recounts the stories behind his official press dispatches—searing firsthand accounts of the frightening, grotesque, and comically absurd aspects of life during war. The Soccer War is a singular work of journalism.

Ryszard Kapuscinski, Poland’s most celebrated foreign correspondent, was born in 1932 in Pinsk (in what is now Belarus) and spent four decades reporting on Asia, Latin America, and Africa. He is also the author of Imperium, Another Day of Life, and The Soccer War. His books have been translated into 28 languages. Kapuscinski died in 2007.

"When our children's children want to study the cruelties of the late 20th century; when they wonder why revolution after revolution betrayed its promises through greed, fear and confusion, they should read Ryszard Kapuscinski." —The Wall Street Journal"Kapuscinski is the conjuror extraordinary of modern reportage, and The Soccer War is a splendid example of his magic."—John le Carré"Powerful and touching."—The New York Times Book Review"Stripped of excess, remarkably void of cynicism, Kapuscinski's writing has the force and vision of literature . . . . He makes his world so real, so alive beyond obscure headlines and other mind-numbing inoculations."—Boston Globe