The Shadow of the Sun (Vintage International) (Paperback) 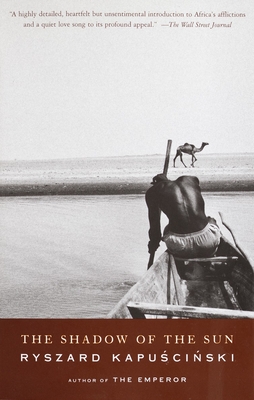 The Shadow of the Sun (Vintage International) (Paperback)


Currently Unavailable
In 1957, Ryszard Kapuscinski arrived in Africa to witness the beginning of the end of colonial rule as the first African correspondent of Poland's state newspaper. From the early days of independence in Ghana to the ongoing ethnic genocide in Rwanda, Kapuscinski has crisscrossed vast distances pursuing the swift, and often violent, events that followed liberation. Kapuscinski hitchhikes with caravans, wanders the Sahara with nomads, and lives in the poverty-stricken slums of Nigeria. He wrestles a king cobra to the death and suffers through a bout of malaria. What emerges is an extraordinary depiction of Africa--not as a group of nations or geographic locations--but as a vibrant and frequently joyous montage of peoples, cultures, and encounters. Kapuscinski's trenchant observations, wry analysis and overwhelming humanity paint a remarkable portrait of the continent and its people. His unorthodox approach and profound respect for the people he meets challenge conventional understandings of the modern problems faced by Africa at the dawn of the twenty-first century.
Ryszard Kapuscinski lives in Warsaw, Poland.
“A highly detailed, heartfelt, but unsentimental introduction to Africa’s afflictions and a quiet love song to its profound appeal.” —The Wall Street Journal, Ryszard Kapuscinski (Author of The Emperor)

"The penetrating intelligence of Mr. Kapuscinski's vision and his knack for a kind of crystallized descriptive writing have never been on better display. . . . A marvel of humane, sorrowful and lucid observation." —The New York Times

“[Kapuscinski] has explored that sliver of high, thinly populated ground on which journalism and literature are occasionally joined. . . . A wise, engaging close-up filled with faces, landscapes, rutted roads, and the daily perils of African life." —BusinessWeek

“[Kapuscinski's] great strengths are his style--candid, understated and slightly absurdist, veering into abrupt flights of lyricism on unexpected subjects--and his gift for picking out stories, that condense volumes of information into a single perfectly crafted passage." —The Washington Post