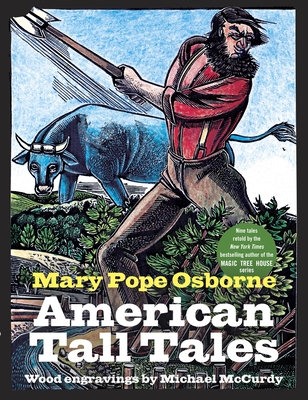 In the tradition of the original nineteenth-century storytellers, Mary Pope Osborne compiles, edits, and adds her own two cents’ worth—and also supplies fascinating historical headnotes. Michael McCurdy’s robust colored wood engravings recall an earlier time, perfectly capturing all the vitality of the men and women who carved a new country out of the North American wilderness.

Mary Pope Osborne is the award-winning author of over sixty books for children. Her works include One World, Many Religions; New York’s Bravest; Tales from the Odyssey; Adaline Falling Star; and the Magic Tree House series, a New York Times number one bestselling children’s book series that has sold over 100 million copies worldwide. Ms. Osborne lives in northwestern Connecticut with her husband, Will.

Michael McCurdy is a distinguished illustrator whose wood engravings and drawings have enhanced many books for both adults and children. From 1968 to 1985, he owned Penmaen Press Books, where he produced beautiful small-press first editions by leading American and European writers and poets. He wrote and illustrated An Algonquin Year: The Year According to the Full Moon and edited and illustrated Escape from Slavery: The Boyhood of Frederick Douglass in His Own Words. He lives with his wife, Deborah, in Massachusetts.
"McCurdy's intricate wood engravings set these larger-than-life folk on majestic landscapes brimming with energy, rich with wildlife and local color. The author's thoughtful introduction and notes round out this superlative offering."--(starred) School Library Journal.