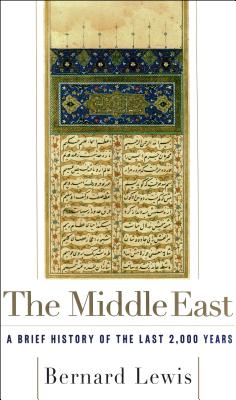 A comprehensive history from the world’s foremost authority on the Middle East.

In a sweeping and vivid survey, renowned historian Bernard Lewis charts the history of the Middle East over the last 2,000 years, from the birth of Christianity through the modern era, focusing on the successive transformations that have shaped it.

Drawing on material from a multitude of sources, including the work of archaeologists and scholars, Lewis chronologically traces the political, economical, social, and cultural development of the Middle East, from Hellenization in antiquity to the impact of westernization on Islamic culture. Meticulously researched, this enlightening narrative explores the patterns of history that have repeated themselves in the Middle East.

Bernard Lewis (born May 31, 1916) was born in London. He is the author of forty-six books on Islam and the Middle East, including Notes on a Century: Reflections of a Middle East Historian; The End of Modern History in the Middle East; and The Crisis of Islam: Holy War and Unholy Terror. He also wrote three major syntheses for general audiences: The Arabs in History; The Middle East and the West; and The Middle East. Lewis is the Cleveland E. Dodge Professor Emeritus at Princeton University.