The Serpent and the Rainbow (Paperback) 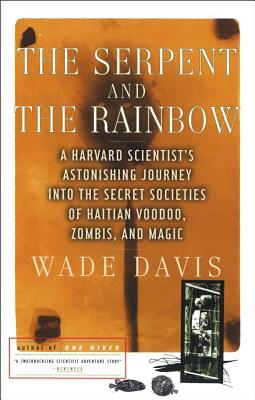 The Serpent and the Rainbow (Paperback)


Ships to Our Store in 1-5 Days
A scientific investigation and personal adventure story about zombis and the voudoun culture of Haiti by a Harvard scientist.

In April 1982, ethnobotanist Wade Davis arrived in Haiti to investigate two documented cases of zombis—people who had reappeared in Haitian society years after they had been officially declared dead and had been buried. Drawn into a netherworld of rituals and celebrations, Davis penetrated the vodoun mystique deeply enough to place zombification in its proper context within vodoun culture. In the course of his investigation, Davis came to realize that the story of vodoun is the history of Haiti—from the African origins of its people to the successful Haitian independence movement, down to the present day, where vodoun culture is, in effect, the government of Haiti’s countryside.

The Serpent and the Rainbow combines anthropological investigation with a remarkable personal adventure to illuminate and finally explain a phenomenon that has long fascinated Americans.
Wade Davis is a writer, photographer, filmmaker, and former Explorer-in-Residence at the National Geographic Society. He is Professor of Anthropology and the BC Leadership Chair in Cultures and Ecosystems at Risk at the University of Columbia. Davis has written 22 books and is the winner of the 2012 Samuel Johnson prize. He holds degrees in anthropology and biology and received his Ph.D. in ethnobotany, all from Harvard University.
"Exotic and far-reaching . . . a corker of a read, just the way Indiana Jones would tell it." -- The Wall Street Journal

"Zombis do come back from the dead, and Wade Davis knows how." -- Washington Post Book World

"An account solving one of the most puzzling biological mysteries of all time." -- Omni