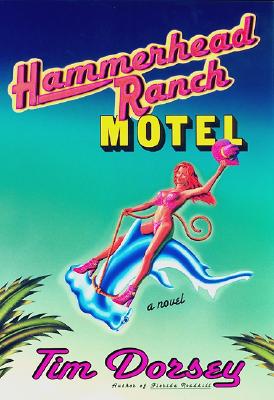 Tim Doroey, author of the raucous, raw-edged, hilariously bent literary joy-ride, Florida Roadkill, now invites you back to his Sunshine State--not the tourist-mecca peneioner-paraclise the Chamber of Commerce would have you visit, but an Eden verdant with lost drug money; a center of lunatic, gravity, drawing fugitives, gangsters, losers, sociopaths and psychos of every flavor and degree to its tropic environs. And they all congregate in one sleazy, run-down motel perched on the Gulf of Mexico, just a short spitting distance from Tampa Bay.

Every room in the Hammerhead Ranch is host to a different schemer or slimeball. The Diaz Boys--cocaine duckpins who have survived only by the dumbest of luck--are stuck there with ten thousand hot, zebra-striped beepers. It's where Zargoza--ne Harvey Fiddlebottom--runs his bogus sweepstakes scam. Here undercover cops running sting operations on undercover cops are busted by undercover cops, runaway checkout girls turn into sex-crazed pot maniacs and a virgin hard-luck gigolo strikes out again.

And just down the row, the native, Serge A. Storms, is hiding out from the Florida "heat"--("you go and do a little spree killing and they never let you forget it!")--and looking out for the silver briefcase stuffed with five million dollars that has become his raison detre ...along with the compulsive need to visit every sight of local interest in his beloved home state. And since Serge, has stopped keeping up with his meds, he is capable of wreaking more havoc than hurricane, Rolando-berto--the big wind gathering force offshore, just waiting for the opportunity to blow everything straight to hell.

Like Hiaasen on a razor juiced with Quentin Tarantino amphetamine, Tim Dorsey's Hammerhead Ranch Motel is a rapid-fire, over-the-top mix of dancing Chihuahuas dressed up to predict the, weather, druggedout Don Johnson impersonators and skydiving Hemingways, hateful two-ton deejays and octogenarian enforcers. It is hilarious and deranged, but this is Florida, after all--where a direct hit from a catastrophic hurricane is the least of your worries.