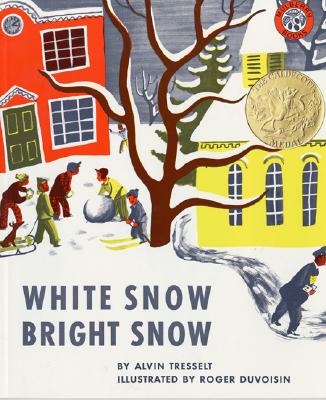 The classic Caldecott Medal–winning picture book about a neighborhood transformed by a delightful snowfall, from the legendary picture book duo Alvin Tresselt and Roger Duvoisin.

When the first flakes fell from the grey sky, the postman and the farmer and the policeman and his wife scurried about doing all the practical things grown-ups do when a snowstorm comes. But the children laughed and danced, and caught the lacy snowflakes on their tongues.

All the wonder and delight a child feels in a snowfall is caught in the pages of this book—the frost ferns on the windowsill, the snowman in the yard and the mystery and magic of a new white world.

Roger Duvoisin's pictures in soft blue half-tones with brilliant splashes of yellow and red emphasize the happiness and humor as well as the poetic quality of the text.

First published in 1947, this classic picture book won the 1948 Caldecott Medal and was the first of eighteen picture book collaborations by Alvin Tresselt and Roger Duvoisin.

Alvin Tresselt (1916-2000) grew up in Passaic, New Jersey and worked in children’s book publishing in New York City for many years. He is the author of more than 50 picture books, including the retelling of the Ukrainian folk tale The Mitten. His first of eighteen collaborations with Roger Duvoisin, White Snow, Bright Snow, earned the 1948 Caldecott Medal.

Roger Duvoisin (1904-1980) was born in Geneva, Switzerland and moved to the United States in 1930. He lived and worked in NYC until 1938, when he became an American citizen and moved to New Jersey. He was the illustrator of more than 140 picture books, 40 of which he wrote himself. He earned the Caldecott Medal in 1948 for White Snow, Bright Snow by Alvin Tresselt.