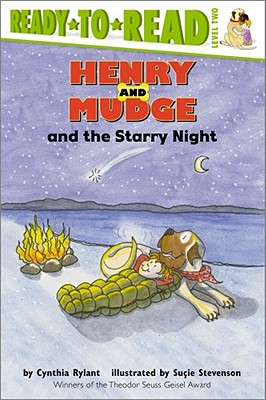 This is book number 17 in the Henry & Mudge series.

Henry and his dog Mudge go camping with Henry's parents in this seventeenth Ready-to-Read book of their adventures.

It's time for a camping trip with Henry's parents! They'll go on hikes and smell good smells. They'll see deer and raccoons and waterfalls and rainbows. Henry's mother will cook camp food and Henry's father will sing sappy old songs, and they'll all lie on their backs and look at the stars (except for Mudge—he'll chew on a log, instead). And at the end of a perfect day, Henry and Mudge will snuggle in their tent and dream wonderful green dreams.
Cynthia Rylant is the author of more than 100 books for young people, including the beloved Henry and Mudge, Annie and Snowball, Brownie & Pearl, Motor Mouse, and Mr. Putter & Tabby series. Her novel Missing May received the Newbery Medal. She lives in Portland, Oregon.

Suçie Stevenson is the acclaimed author and illustrator of more than fifty books for children and is best known as the illustrator of the popular Henry and Mudge books by Cynthia Rylant. She lives on Cape Cod, Massachusetts, with her little cocker spaniel, Gracie.