A Sweet Smell of Roses (Hardcover) 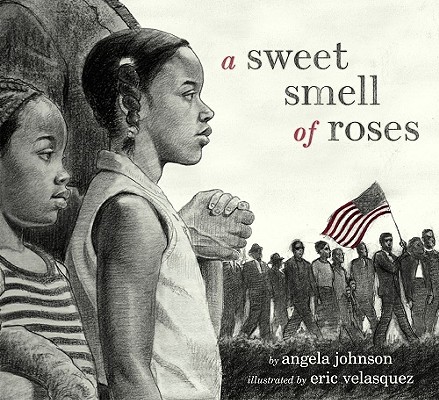 A Sweet Smell of Roses (Hardcover)


Ships to Our Store in 1-5 Days
Two young girls not only witness but help to change history in this inspiring and urgent Civil Rights-era picture book by three-time Coretta Scott King Award winner Angela Johnson.

There's a sweet, sweet smell in the air as two young girls sneak out of their house, down the street, and across town to where men and women are gathered, ready to march for freedom and justice.

Inspired by the countless young people who took a stand against the forces of injustice, two Coretta Scott King Honorees, Angela Johnson and Eric Velasquez, offer a stirring yet jubilant glimpse of the youth involvement that played an invaluable role in the Civil Rights movement.
Angela Johnson has won three Coretta Scott King Awards, one each for her novels The First Part Last, Heaven, and Toning the Sweep. The First Part Last was also the recipient of the Michael L. Printz Award. She is also the author of the novels Looking for Red and A Certain October. Her books for younger readers include the Coretta Scott King Honor Book When I Am Old with You, illustrated by David Soman; Wind Flyers and I Dream of Trains, both illustrated by Loren Long; and Lottie Paris Lives Here and its sequel Lottie Paris and the Best Place, both illustrated by Scott M. Fischer. Additional picture books include A Sweet Smell of Roses, Just Like Josh Gibson, The Day Ray Got Away, and All Different Now. In recognition of her outstanding talent, Angela was named a 2003 MacArthur Fellow. She lives in Kent, Ohio. Visit her at AJohnsonAuthor.com.

Eric Velasquez earned his BFA from the School of Visual Arts and has illustrated over thirty children’s books, earning a Coretta Scott King - John Steptoe Award for New Talent, an NAACP Image award, the 2011 Pura Belpré Award for illustration, the 2018 Walter Award, and an SCBWI’s Golden Kite Award.

"The pervasive smell of roses is an effective metaphor for the scent of freedom in the air, and Johnson's poetic text is powerful."

"This book is not only about segregation; it's also about the crowds of people 'walking our way toward freedom,' the thrilling portrait of Dr. King, and the two brave kids who cross the line." -- Booklist