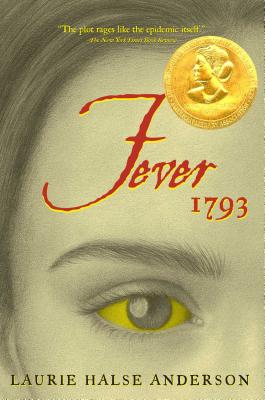 
Currently Unavailable
From Fever 1793
"Where's Polly?" I asked as I dropped the bucket down the well. "Did you pass by the blacksmith's?
"I spoke with her mother, with Mistress Logan," Mother answered softly, looking at her neat rows of carrots.
"And?" I waved a mosquito away from my face.
"It happened quickly. Polly sewed by candlelight after dinner. Her mother repeated that over and over, 'she sewed by candlelight after dinner.' And then she collapsed."
I released the handle and the bucket splashed, a distant sound.
"Matilda, Polly's dead."
August 1793. Fourteen-year-old Mattie Cook is ambitious, adventurous, and sick to death of listening to her mother. Mattie has plans of her own. She wants to turn the Cook Coffeehouse into the finest business in Philadelphia, the capital of the new United States.
But the waterfront is abuzz with reports of disease. "Fever" spreads from the docks and creeps toward Mattie's home, threatening everything she holds dear.
As the cemeteries fill with fever victims, fear turns to panic, and thousands flee the city. Then tragedy strikes the coffeehouse, and Mattie is trapped in a living nightmare. Suddenly, her struggle to build a better life must give way to something even more important -- the fight to stay alive.
Laurie Halse Anderson is a New York Times bestselling author known for tackling tough subjects with humor and sensitivity. Her work has earned numerous ALA and state awards. Two of her books, Chains and Speak, were National Book Award finalists. Chains also received the 2009 Scott O’Dell Award for Historical Fiction, and Laurie was chosen for the 2009 Margaret A. Edwards Award. Mother of four and wife of one, Laurie lives in Pennsylvania, where she likes to watch the snow fall as she writes. You can follow her adventures on Twitter @HalseAnderson, or visit her at MadWomanintheForest.com.