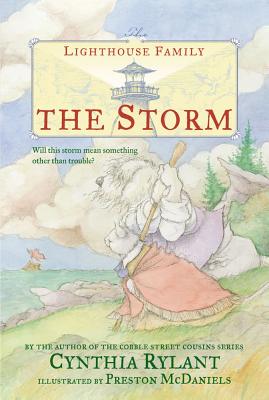 This is book number 1 in the Lighthouse Family series.

Life with only the sea can be lonely. Just ask Pandora and Seabold. They've lived most of their lives with the sea -- Pandora in a lighthouse and Seabold on a boat -- and they're each quite used to being alone. Or they were.
But one day, the sea did something extraordinary: It brought Pandora and Seabold together! And even better, the sea gave them the ingredients for an adventure that neither of them had considered before-an adventure called "family."
Cynthia Rylant is the author of more than 100 books for young people, including the beloved Henry and Mudge, Annie and Snowball, Brownie & Pearl, Motor Mouse, and Mr. Putter & Tabby series. Her novel Missing May received the Newbery Medal. She lives in Portland, Oregon.

Preston McDaniels is the illustrator of the Phineas L. MacGuire series and Cynthia Rylant’s Lighthouse Family series. He lives in Aurora, Nebraska, with his wife and two daughters.
Publishers Weekly It's smooth sailing for Rylant's sweet, sea-inspired tale...(which) will keep young readers turning the pages-and on the lookout for future titles in the series.