Friends Change the World: We Are The Beatles (Hardcover) 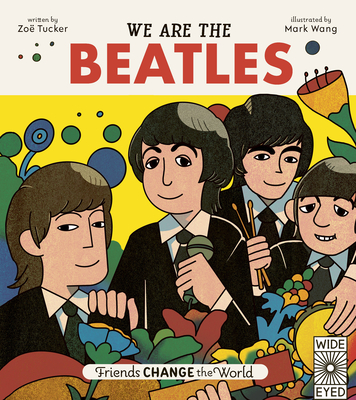 Friends Change the World: We Are The Beatles (Hardcover)


Ships to Our Store in 1-5 Days
This inspiring picture book tells the story of the friendship between Ringo, Paul, George, and John, and how their unique talents came together to make something brilliant.

In 1957, a boy named Paul met a boy named John. John was funny and confident, while Paul was quiet and steady, but one thing they had in common was a love and talent for songwriting.

When they were joined by George and Ringo, they formed the band whose name would soon be known across the world: The Beatles. Together, the Fab Four became the world’s best-loved band, drawing huge crowds to packed-out stadiums.

But even they got nervous sometimes, and in those times they knew they could rely on each other. Through the power of friendship, The Beatles made their biggest dreams come true and still bring joy to the lives of millions.

Friends Change the World is a series of picture books that celebrates the power of friendship. From musical greats to sports champions, scientists and explorers to artists and activists, these are the true stories of real friends who achieved amazing things. Whether best friends since school or thrown together by a chance encounter, they supported and inspired each other to make their shared dreams come true. This charming series shows 4- to 7-year-olds how togetherness, respect, and friendship can make the world a better place.

Zoë Tucker is passionate about picture books. In her day job as a picture-book art director and designer, she has worked with bestselling artists including Waterstones–prize winner Lizzy Stewart, Axel Scheffler, Nick Sharratt, and Helen Stephens. She is the author of Greta and the Giants, and books in the Friends Change the World series.

Mark Wang is an Illustrator and comic artist original from Tucson, Arizona, currently located in the fabled NYC. His clients include Apple, The New York Times, and The Wall Street Journal.