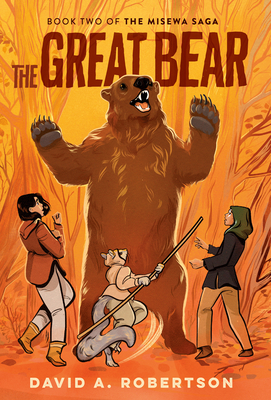 By David A. Robertson

This is book number 2 in the The Misewa Saga series.

In this second book in the Narnia-inspired Indigenous middle-grade fantasy series, Eli and Morgan journey once more to Misewa, travelling back in time.

Back at home after their first adventure in the Barren Grounds, Eli and Morgan each struggle with personal issues: Eli is being bullied at school, and tries to hide it from Morgan, while Morgan has to make an important decision about her birth mother. They turn to the place where they know they can learn the most, and make the journey to Misewa to visit their animal friends. This time they travel back in time and meet a young fisher that might just be their lost friend. But they discover that the village is once again in peril, and they must dig deep within themselves to find the strength to protect their beloved friends. Can they carry this strength back home to face their own challenges?
DAVID A. ROBERTSON is the author of numerous books for young readers including When We Were Alone, which won the 2017 Governor General's Literary Award. The Barren Grounds, the first book in the middle-grade The Misewa Saga series, received a starred review from Kirkus and was a Kirkus and Quill & Quire best middle-grade book of 2020, as well as a USBBY and Texas Lone Star selection, and nominated for the Ontario Library Association’s Silver Birch Award. A sought-after speaker and educator, as well as recent recipient of the Writers' Union of Canada's Freedom to Read Award, Dave is a member of the Norway House Cree Nation and currently lives in Winnipeg. For more information, visit his website: www.darobertson.ca and follow him on Twitter: @DaveAlexRoberts
A Canadian Children's Book Centre Favourite Book of the Year 2021