The Double Helix: A Personal Account of the Discovery of the Structure of DNA (Paperback) 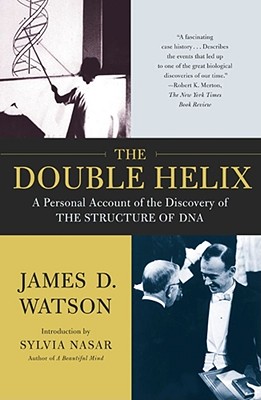 The Double Helix: A Personal Account of the Discovery of the Structure of DNA (Paperback)


Available at One of Our Locations
The classic personal account of Watson and Crick’s groundbreaking discovery of the structure of DNA, now with an introduction by Sylvia Nasar, author of A Beautiful Mind.

By identifying the structure of DNA, the molecule of life, Francis Crick and James Watson revolutionized biochemistry and won themselves a Nobel Prize. At the time, Watson was only twenty-four, a young scientist hungry to make his mark. His uncompromisingly honest account of the heady days of their thrilling sprint against other world-class researchers to solve one of science’s greatest mysteries gives a dazzlingly clear picture of a world of brilliant scientists with great gifts, very human ambitions, and bitter rivalries.

With humility unspoiled by false modesty, Watson relates his and Crick’s desperate efforts to beat Linus Pauling to the Holy Grail of life sciences, the identification of the basic building block of life. Never has a scientist been so truthful in capturing in words the flavor of his work.
James D. Watson, together with Francis Crick and Maurice Wilkins, was awarded the Nobel Prize for Physiology or Medicine in 1962. He is Chancellor Emeritus of the Watson School of Biological Sciences at Cold Spring Harbor Laboratory.
Robert K. Merton The New York Times Book Review A fascinating case history...Describes the events that led up to one of the great biological discoveries of our time.

Jacob Bronowski The Nation No one could miss the excitement in this story of a great and beautiful discovery....The book communicates the spirit of science as no formal account has ever done....the sense of the future, the high spirits, and the rivalry and the guesses right and wrong, the surge of imagination and the test of fact.

Peter B. Medewar The New York Review of Books An enormous success...a classic.

Andre Lwoff Scientific American The history of a scientific endeavor, a true detective story that leaves the reader breathless from beginning to end.

Richard Feynman He has described admirably how it feels to have that frightening and beautiful experience of making a scientific discovery.