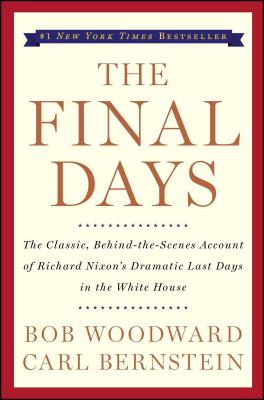 “An extraordinary work of reportage on the epic political story of our time” (Newsweek)—from Bob Woodward and Carl Bernstein, Pulitzer Prize-winning coauthors of All the President’s Men.

The Final Days is the #1 New York Times bestselling, classic, behind-the-scenes account of Richard Nixon’s dramatic last months as president. Moment by moment, Bernstein and Woodward portray the taut, post-Watergate White House as Nixon, his family, his staff, and many members of Congress strained desperately to prevent his inevitable resignation. This brilliant book reveals the ordeal of Nixon’s fall from office—one of the gravest crises in presidential history.

Bob Woodward is an associate editor at The Washington Post where he has worked for 50 years. He has shared in two Pulitzer Prizes, one for his Watergate coverage and the other for coverage of the 9/11 terrorist attacks. He has authored 20 national bestselling books, 14 of which have been #1 New York Times bestsellers.

Carl Bernstein is a contributing editor for Vanity Fair magazine and has written for a variety of publications. He is the author of Loyalties: A Son’s Memoir, and has coauthored His Holiness: John Paul II and the History of Our Time with Marco Politi, as well as All the President's Men and The Final Days with Bob Woodward.

"An extraordinary work of reportage on the epic political story of our time."
-- Newsweek

"Unprecedented...Mr. Nixon emerges as a tragic figure weathering a catastrophic ordeal...and weathering it with considerable courage and dignity."
-- The New York Times

"The epic political story of our time."
-- Newsweek