Justice At Sea (Empire of the House of Thorns #2) (Paperback) 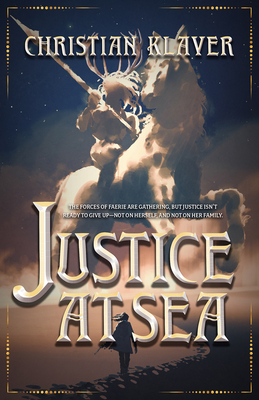 Justice At Sea (Empire of the House of Thorns #2) (Paperback)

The tides of the Faerie War are turning, but at how high a cost for the Kasric family?

Justice Kasric, her siblings, and her parents are locked in combat on both sides of the Human-Faerie War. At fifteen, Justice may be the youngest ever Admiral to command her own ship and lead a resistance, but she has the magic and the will to do it. If only nearly every other member of her family weren’t either in immediate danger of dying—or attempting to kill her!

Forced to make dangerous pacts with more than one unpredictable ally, only Justice can decide how far she’ll go to save London. Is it worth sacrificing even a member of her own family

Christian Klaver has been writing for over twenty years, with a number of magazine publications, including Escape Pod, Dark Wisdom Anthology, and Anti-Matter. He’s the author of The Supernatural Case Files of Sherlock Holmes series, but has written over a dozen novels, both fantasy and sci-fi, often with a Noir bent. He's worked as book-seller, bartender and a martial-arts instructor before settling into a career in internet security. He lives just outside the sprawling decay of Detroit, Michigan, with his wife, Kimberly, his daughter, Kathryn, and a group of animals he refers to as The Menagerie. He’s also a part of the Untitled Writer’s Group based in Ann Arbor for the past decade or so with a bunch of equally starry-eyed dreamers and social misanthropes.

“[T]hose who enjoy epic fantasy will find much to enjoy here . . . Sweeping and intricate.” —Kirkus Reviews