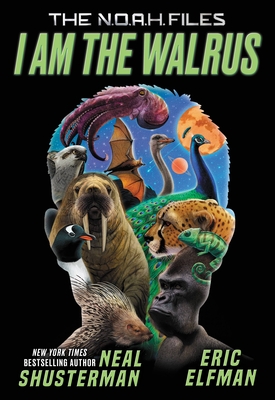 When fourteen-year-old Noah falls from the trees on his classmate Sahara, he doesn’t understand how, or why, he would have been up there. It’s just one more in a string of strange things happening to Noah lately.

Like when he keels over and every muscle in his body freezes when confronted by bullies. And when he vanishes into the background at a moment he doesn’t want to be noticed. And when he unexpectedly blasts Sahara with a bird shriek while flapping his arms uncontrollably in the middle of a school dance. What does it all mean? And why do there suddenly seem to be so many mysterious people trying to kill him?

Noah’s friend Ogden has an idea…but like all of Ogden’s ideas, it’s out there. Way out there…

Neal Shusterman is the New York Times bestselling and award-winning author of over thirty books, including Challenger Deep, which won the National Book Award; Scythe, a Michael L. Printz Honor Book; Dry, which he cowrote with his son, Jarrod Shusterman; and Unwind, which won more than thirty domestic and international awards. He invites you to visit him online at storyman.com.

Eric Elfman is a screenwriter and the author of several books for children and young adults, including The Very Scary Almanac and Almanac of the Gross, Disgusting & Totally Repulsive (an ALA Recommended Book for Reluctant Readers); and coauthor of the popular Tesla’s Attic trilogy. He invites you to visit him on Twitter @Eric_Elfman.

“Lively, intelligent prose elevates this story of teenagers versus mad scientists, the third-person point of view offering a stage to various players in their play of galactic consequence. A wild tale in the spirit of Back to the Future, with a hint of Malamud's The Natural tossed in.”—Kirkus Reviews

“This collaboration between Shusterman and Elfman tempers the scarier elements of Nick's quest with deft, humorous writing and plenty of the ordinary adventures of a new kid in school finding his niche. Hand this one to fans of Rick Riordan's Kane Chronicles or Kenneth Oppel's Airborne.”—Booklist

*“Shusterman and Elfman have crafted a plot more devious, characters far quirkier, climaxes (yes, there are two) more breathless, and a narration much, much funnier than recent mad-science offerings. Sticking with a third-person narration frees the authors to be as wryly and sophisticatedly witty as they please without compromising the veracity of their middle-school cast, resulting in storytelling as delightful as the story being told.”—BCCB (starred review)