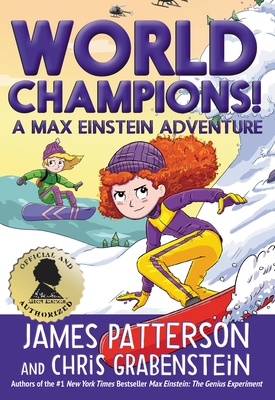 This is book number 4 in the Max Einstein series.

Max finally meets her hero, Albert Einstein, as she dashes across glaciers, visits the Great Barrier Reef, and flies a solar-powered jet in a race to stop Global Warming—before it’s too late for Planet Earth.

From racing across glaciers in Greenland and flying in a super fancy solar-powered jet to Hawaii, to visiting the Great Barrier Reef off the coast of Australia and hanging out with a robot named Leo, twelve-year-old genius Max and her friends live for adventure.

Whenever there's a problem to solve, the kids work better together. So does an evil group of the rich and powerful, who will do whatever it takes to split the kids up—even as the planet is changing before their eyes.

Max has one more surprise in her playbook, and if she's going to pull it off, she needs her team around her. Whoever said that kids can't save the world?

For his prodigious imagination and championship of literacy in America, James Patterson was awarded the 2019 National Humanities Medal, and he has also received the Literarian Award for Outstanding Service to the American Literary Community from the National Book Foundation. He holds the Guinness World Record for the most #1 New York Times bestsellers, including Max Einstein, Middle School, I Funny, and Jacky Ha-Ha, and his books have sold more than 400 million copies worldwide.

A tireless champion of the power of books and reading, Patterson created a children’s book imprint, JIMMY Patterson, whose mission is simple: “We want every kid who finishes a JIMMY Book to say, ‘PLEASE GIVE ME ANOTHER BOOK.’” He has donated more than three million books to students and soldiers and funds over four hundred Teacher and Writer Education Scholarships at twenty-one colleges and universities. He also supports 40,000 school libraries and has donated millions of dollars to independent bookstores. Patterson invests proceeds from the sales of JIMMY Patterson Books in pro-reading initiatives.