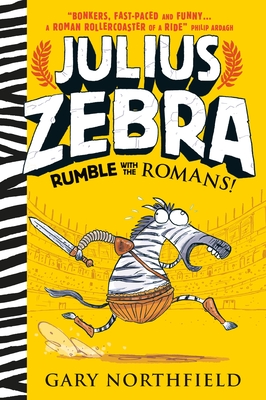 This is book number 1 in the Julius Zebra series.

What happens when you mix the gladiatorial combat of ancient Rome with a fast-talking creature who is DEFINITELY NOT A STRIPY HORSE?

From a smelly water hole on the African savanna, Julius Zebra is captured, along with Milus the scarred lion and Cornelius the clueless warthog. Transported to the ferocious clamor of the Colosseum, Julius Zebra and his motley menagerie of friends must gear up to be . . . gladiators! The only way they will gain their freedom is if they win the love of the Roman crowds. But do they have what it takes to succeed in a world where only the meanest and toughest survive? Follow the madcap adventures of Julius Zebra and his pals in short chapters with funny, irreverent text and zany cartoon-style illustrations, with an illustrated guide to Roman numerals and a handy glossary at the end.
Gary Northfield, best known for his Derek the Sheep comic strip, has been writing and drawing comics since 2002. He lives in England.
Readers will applaud the Monty Python-esque exploits of this hoofed hero.
—Kirkus Reviews

If Greg Heffley were a zebra, this might be his diary, complete with scratchy cartoon illustrations of the goings-on as Julius and his friends attempt to outwit death.
—Publishers Weekly

This zany premise is rife with gags, slapstick comedy, and cartoonish illustrations, wherein the scribbly, bug-eyed animals fight for their lives. Tucked within the nonsense are some nuggets of Roman history and a surprisingly informative glossary. A sequel is assured for those eager for more of Julius’ antics.
—Booklist