Hero on a Bicycle (Paperback) 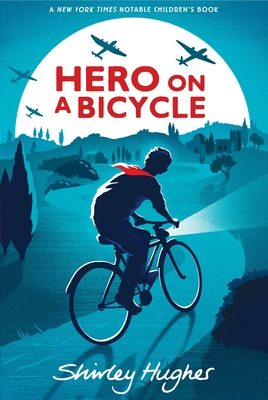 Hero on a Bicycle (Paperback)

Italy, 1944: Florence is occupied by Nazi forces. The Italian resistance movement has not given up hope, though — and neither have thirteen-year-old Paolo and his sister, Costanza. As their mother is pressured into harboring escaping POWs, Paolo and Costanza each find a part to play in opposing the German forces. Both are desperate to fight the occupation, but what can two siblings — with only a bicycle to help them — do against a whole army?
Shirley Hughes (1927–2022) was the author of more than fifty children’s books and the illustrator of some two hundred more. One of the world’s best-loved writers for children, she received the Kate Greenaway Medal twice and was awarded an OBE for her distinguished service to children’s literature. In 2007, her book Dogger was voted the U.K.’s favorite Kate Greenaway Medal–winning book of all time.

Vividly evoking the closing-in conflict, with tanks rumbling along a nearby road, zooming fighter planes and relentless shellfire, Hughes ratchets up the tension. ... Huge as the war is, this story is an intimate one — centering on the courageous actions of one Italian family as the conflict arrives at their doorstep, forcing them to grapple with the harsh complexities of good and evil.
—The New York Times Book Review

After more than 50 years of writing and illustrating children’s books, two-time Greenaway Medal–winner Hughes delivers her first novel, a tense and emotional thriller set during the German occupation of Florence in 1944, near the end of WWII...The Italian setting is vibrantly presented, and Hughes creates both a memorable cast and a palpable sense of danger at a critical juncture of the war.
—Publishers Weekly (starred review)

Setting and atmosphere are surely established, and the sense of danger is everywhere, allying us with the characters’ efforts to survive and subvert their conquerors.
—The Horn Book

In this engrossing story, Hughes combines a riveting plotline with multidimensional characters. It also provides youngsters with some understanding of the choices and conditions faced by people in Europe during World War II.
—School Library Journal

Skillful plotting, with a number of well-placed chapter cliffhangers, and a deftly conveyed sense of place make this a strong choice for historical fiction readers.
—Bulletin of the Center for Children's Books

This is a fast-paced story that keeps the reader engaged and involved. The characters are well-drawn and the reader has a real sense of connection with them.
—Library Media Connection

Hero on a Bicycle is a wartime adventure that will appeal to many late elementary and middle school readers, especially boys who enjoy reading about war and danger. There is much to be learned about the day-to-day existence of those who lived in occupied areas during World War II, and it shows how young people can be empowered, albeit in this case while in serious danger.
—VOYA

This novel has all the vigor, charm, and excitement of a new classic, and its clear prose is suffused with a humanism that is deeply sympathetic.
—Amanda Craig, The Times (U.K.)

With a style that recalls children's classics, Hughes writes with a keen appreciation for children's sensibilities, but never insults them by avoiding the harsh realities of war. Her captivating historical fiction reveals a few of the many unsung heroes of World War II, some with guns and bombs as ammunition, and others with only a bike.
—BookPage

Here, in clear and vivid prose, we meet the exceptional result of [Hughes's] story's long percolation. ... Unusually, in a book for adolescents, readers are drawn not only into Paolo and Constanza's inner lives but also into those of their mother and other adults. This authorial approach gives uncommon dimension and substance to a story not soon forgotten.
—The Wall Street Journal

Under the Tuscan sun and in the dark of night, war forces impossible life-and-death choices in this page-turner that powerfully juxtaposes daring and danger, loyalty and betrayal, evil and human goodness.
—San Francisco Chronicle

A wonderfully written, fast-paced, exciting novel is one kids won’t want to put down.
—GreatestBooksForKids.com (syndicated by Kendal Rautzhan)