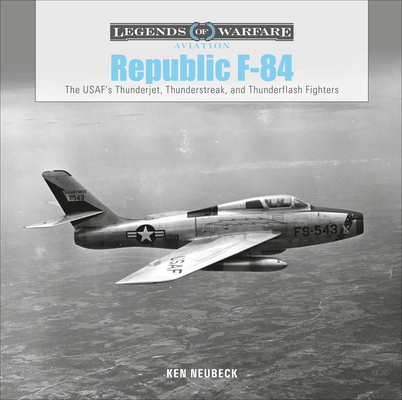 This is book number 36 in the Legends of Warfare: Aviation series.

The F-84 Thunderjet was the US Air Force's main strike aircraft during the Korean War and was used primarily in ground attack operations. Manufactured by the Republic Aviation Corporation, the straight-winged XP-84 prototype first took flight in 1946. Testing revealed lackluster engine performance and structural problems. Design revisions resulted in several new model designations, beginning with the F-84B and followed by the F-84C, which was phased out of operational service by 1952. The F-84D saw significant improvement in engine performance and was followed by the F-84E and the F-84G models, with all three models seeing heavy action in the Korean War. The F-84F Thunderstreak was a swept-wing version that came after the Korean War and was faster than the original F-84 Thunderjet. The Thunderflash was the reconnaissance version of the F-84F.